Instantbird a Mozilla based Instant Messenger

Instantbird plans to be for Instant Messengers what Firefox is for web browsers. The first version with the version 0.1 does show a lot of promise but naturally lacks the stability of a software that has been developed for years. It uses the Mozilla rendering engine to render IMs and the Pidgin libpurple to connect to the various networks.

Eight Instant Messaging networks are currently mentioned on the Instantbird homepage, those are: AIM, Gadu-Gadu, Google Talk, ICQ, MSN, QQ, XMPP and Yahoo!. Several others are however available as well if you want to add a new network. It runs pretty solid for such an early version though and it will be interesting to see how this project evolves in the future.

The roadmap looks promising and is outlined at the developers website of Instantbird. Localization, smiley and sound themes are for instance scheduled for version 0.2 of the client. It will take some time but if the developers manage to put the same effort and dedication into this project than the other teams are putting into developing Firefox, Thunderbird and Songbird they will surely create a remarkable software. 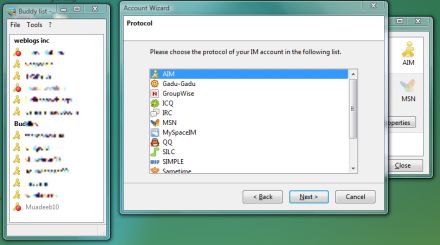 Instantbird is Open Source and available for Microsoft Windows, Linux and Apple Macintosh.

Update: The most recent version of Instantbird is version 1.3. The program has come a long way and one of the main features that makes it attractive is integration of an extension engine that is similar to that of the Firefox web browser and Thunderbird email client.

Extensions add lots of functionality to the program, from themes that changes its look and feel to additional chat protocols and features that add or change features of the messaging client.