Automatic compression of the Registry

I wrote a tutorial yesterday on how to compress the Windows Registry manually. The process itself was not really complicated but it involved booting into DOS to complete the changes to the registry that have been made by the process.

Tehmul (more of that please) left a comment and mentioned a software program named NTREGOPT (NT Registry Optimizer) which optimizes the full registry and performs the replacement during the next system boot automatically.

This is of course a far better method of compressing the Registry as you don't have to reboot to do so which is why I decided to review NTREGOPT here on Ghacks as well. Just run the software after downloading and installing it. It will automatically check and compress the registry displaying information about the reduction at the end of the process. 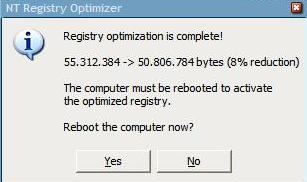 Please note that the homepage lists two different programs on it, and that you need to download the NT Registry Optimizer to use its functionality. The program is fully compatible with all recent versions of the Microsoft Windows operating system including Windows 7.

I'd also like to address why you want to compress the Registry from time to time. You see, Registry space does not get removed from the Registry once assigned to it. This means that the Registry will grow in size over time, and that may impact the time it takes to boot into the operating system.

Similar to Windows 9x/Me, the registry files in an NT-based system can become fragmented over time, occupying more space on your hard disk than necessary and decreasing overall performance. You should use the NTREGOPT utility regularly, but especially after installing or uninstalling a program, to minimize the size of the registry files and optimize registry access.

The optimization basically removes empty space in the Registry that is no longer needed so that the file size is reduced as a consequence.

Previous Post: « How to reduce the size of the Windows Registry
Next Post: « 10 Simple Ways to Speed up Windows Vista