I fell in love with shoot em up games back when I got my first Atari 2600 system and the game River Raid. Was lots of fun back then. The 8-bit and 16-bit era, that fell in line with great systems such as Nintendo's SNES and NES, Sega's Mega Drive and the home computer systems C-64 and Amiga, was the golden age of shoot em ups. I still have fond memories of games like Blood Money, Lords of Thunder, Raiden, Thunderforce, M.U.S.H.A or R-Type.

G-Type, today's Game Saturday game, is a R-Type clone. The game has been developed a long time ago, which you will notice for the first time when you try to change the resolution of the game. It launches in a 320x240 window. The highest resolution, only available in full screen mode is 640x480. Some might say that this makes the game unplayable on today's high resolution monitor systems. I say, it plays just fine. 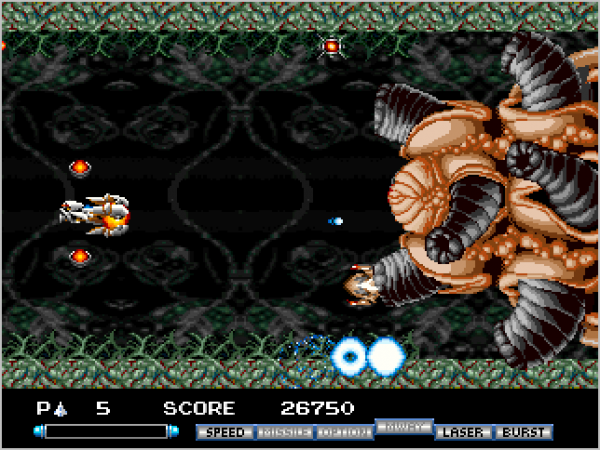 The game is divided into five stages which all scroll vertically, just like the original R-Type. You move your ship with the cursor keys, shoot with Ctrl and select one of the available extras with Shift. About the extras. Some enemies drop extra points on the screen. Collecting extras on the screen moves the extras bar forward by one. Extras range from speed upgrades to satellites and multi-way lasers.

Those extras are important, as you will have a very hard time beating the game if you do not pick them up to make your ship stronger. You will have to make some strategic decisions in the beginning. Will you go for speed upgrades and the satellites to protect your ship or the extra fire power that you get after collecting several extras?

If you are good, you will end up with all the extras that you can get. It needs to be noted that only one of the last three extras can be active at a time.

The game does not seem to be as difficulty as the original R-Type. That, or I have really improved my shoot em up skills in the past years. The game is fun to play, despite the mediocre graphic settings. Windows users who would like to play a fun shoot em up game can download the game right from our servers. The game ran fine on a 64-bit Windows 7 Professional installation. It should run fine on other Windows systems as well. [Download not found]