Casir, which stands for Common and Stubborn Infections Remover, has been specifically designed by its developer to remove virus infections on a system that many regular antivirus software programs have troubles disinfecting.

These types of malware often manipulate the system to make their removal more difficult, for instance by disabling Safe Mode, preventing the installation of popular antivirus software or disabling other built-in tools like the Windows Task Manager.

When a system gets infected by nasty trojans or worms, like those of the Trojan Downloader or Win32.VB family, then it is often too late to use conventional security tools to remove it.

Casir is a click and run tool that does not require expertise or advanced tech knowledge to run. You can start the portable software from a local hard drive, removable device or even an optical disc if you want. Please note that you need elevated privileges for some of the program's functionality. The interface looks clean, and all that is really needed is to click the Start button to initiate the system scan.

Unlike other antvirus software, Casir will not scan all files on all connected drives and devices. It identifies, cleans and removes a fixed set of computer worms, trojans and other forms of malicious software. 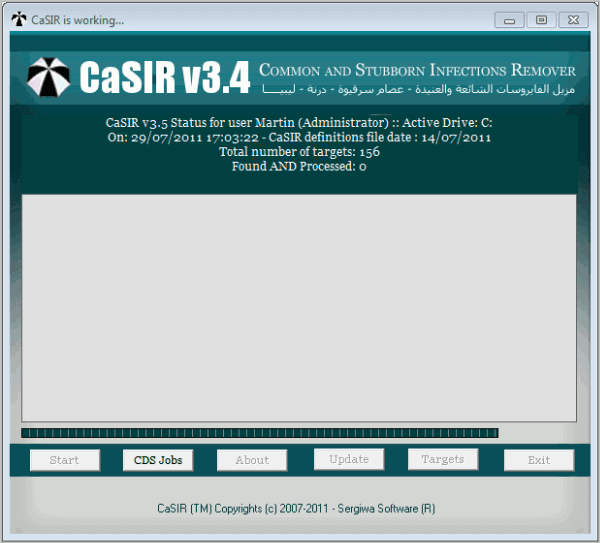 So what exactly is Casir doing when it finds an infection or insecure system settings?

Casir removes all detected part of malware on the system, before it starts a CDS Job. This is basically a deep scan of the system. It will scan all files, Services, Registry information and memory resident processes for malicious traces. The developers have added this scan to counter malware that tries to avoid detection by randomizing Registry keys, file names and locations. A log is generated and saved in the system folder. 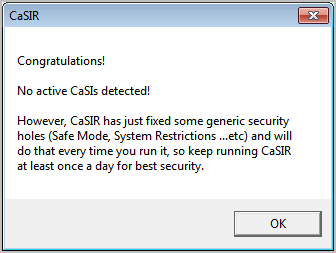 A click on Targets in the application interface opens the list of malware that is currently being detected by Casir.

Casir is anice to have security software for Windows, especially since it is a portable program. It can easily be added to a tools collection on an USB stick or DVD.

The program itself is compatible with 32-bit and 64-bit editions of the Microsoft Windows operating system. It can be downloaded directly from the developer website.

Update: Please note that the Casir homepage is no longer available. While the program itself can still be downloaded from a third-party download site such as Softpedia, it needs to be noted that it may not work properly anymore as it has not been updated since 2011.

It is recommended to use other applications instead, for instance Malwarebytes Anti-Malware to scan the system, or Virus Effect Remover which comes close to the functionality that Casir offers.

Martin Brinkmann is a journalist from Germany who founded Ghacks Technology News Back in 2005. He is passionate about all things tech and knows the Internet and computers like the back of his hand. You can follow Martin on Facebook or Twitter
View all posts by Martin Brinkmann →
Previous Post: « Skype Update 5.5 With Critical Security Vulnerability
Next Post: Avast aswMBR, Sophos Anti-Rootkit, Free Rootkit Scanners »