At least part of the user interface of the upcoming next version of Windows, running under the internal name Windows 8, will ship with a Metro UI. Part of that is a tile based system to display information right on the screen. It is likely that Microsoft will let this run on top of the standard desktop, if users want it.

If you are running Windows 7 you can now bring those tiles to your operating system. Software Developer Paras Sidhu has created an application that adds seven different tiles to the Windows 7 desktop.

It needs to be noted at this point that the software is offered as a beta version. If you want to run it in a productive environment make backups before you do so.

Pulmon is a portable application that ships as a RAR file. Just extract the archive on your system and start the Pulmon executable afterwards which is located in the root folder.

The program displays all available tiles directly in the main application window. A click on a tile adds or removes it from the desktop. All tiles listed in the upper half of the screen are not shown on the desktop, the tiles in the lower half are shown on the Windows desktop.

Each tile can be moved around freely on the desktop to place it in a suitable location. Lets take a look at the tiles that are currently available:

The program ships without customization options. It is for instance not possible to change the web links. 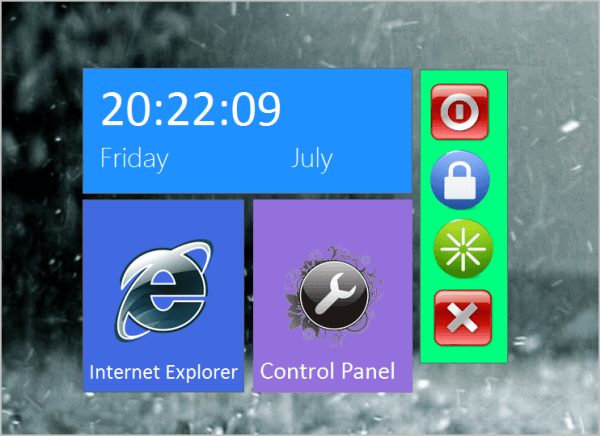 The developer plans to add more tiles in future versions. A tile to search for files locally or on the Internet would for instance be really nice. Another nice to have feature would be color customizations of the tiles.

Update: The most recent version of the application is out of beta. It ships with additional widgets now that you can displays as tiles on the screen. This includes new tiles for Firefox, shutdown, restart and log off, and several other options.