I have been using Dropbox extensively in the last months. For a project that I'm currently developing with Daniel that is going to launch this year (for webmasters, domain management and a lot more, contact me if you like more information and early beta access) and for access to files on all computers that I own. Dropbox is an elegant cloud based file syncing solution for Windows, Mac, Linux and mobile devices. You could say they cover all major operating systems. That's great. What's missing, at least for some users, is a portable version that you can run on computers where you cannot or do not want to install Dropbox.

There is unfortunately no official portable version available. Veteran Dropbox users have used the forums to find portable Dropbox versions, with the problem that there have been quite a few developers who started and ended portable projects. And with hundreds of thousands of posts, it became more than a nuisance to find a new working version.

Dropbox Portable AHK promises to change that. The developer has created a permanent home for the software that offers downloads, instructions and support. 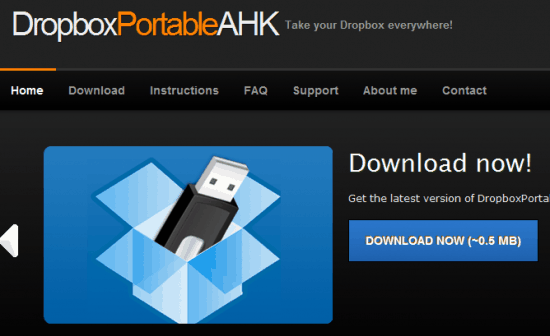 In case you are wondering, AHK means AutoHotkey, a popular scripting language.

So how do you use the portable version of Dropbox?

You download the latest available version and unpack it to a directory on your system. Once done open the directory and launch the DropboxPortableAHK.exe application. It triggers the download of Dropbox files on first run, which are required to use Dropbox (doh!). The files are downloaded into the same directory, and setup information are displayed once the 15 Megabyte download has completed. 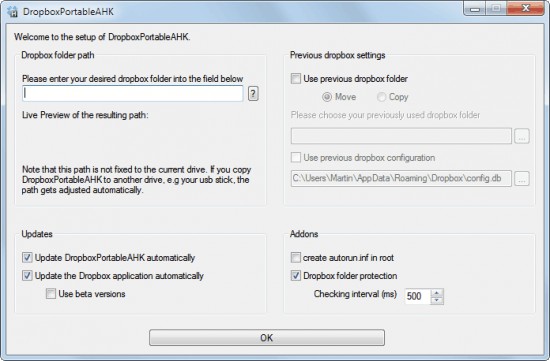 It is possible to configure a new Dropbox folder, or use a previous Dropbox configuration (the latter did not work for me). Updates are set to be downloaded and applied automatically both for Dropbox Portable AHK and the Dropbox application.

Dropbox Portable AHK launches the official setup of Dropbox afterwards. Here it is possible to create a new account or configure an existing account. Existing users need to supply their username and password, everyone else needs to follow the account creation steps.

The setup is a one-time process. Once setup Dropbox can be started with a click on the portable executable in the application folder. The files can be copied to USB devices or other computer systems without the need for another setup phase.

Users may notice that the context menu entry does not work on a portable version of Dropbox. The developer has posted instructions on how to re-add the feature, but notes that it creates files on the target system.

A portable version of Dropbox offers several advantages over the installation. It is for instance easier to maintain multiple Dropbox profiles on a system and use Dropbox from everywhere, even on computers that do not allow the installation of software (if Windows is the OS) and where you do not have administrative privileges. Dropbox Portable AHK keeps Dropbox and itself up to date if the default configuration has not been changed during setup.

Update: The homepage of the portable version of Dropbox changed. We have modified the link in the article to reflect that. The program itself is still under active development.