Maybe you have experienced the following situation in Windows in the past; You try to delete a file in Windows Explorer but get a message that it cannot be deleted. Common messages include "Cannot delete file: Access is denied", "The file is in use by another program or user" and " Cannot delete file: It is being used by another person or program".

For some files, the situation is easy to resolve. A video file for instance that is still playing in a video player cannot be deleted before the player is closed. It happens sometimes that files are locked by Windows even if you cannot find another program or person that's accessing them at the moment.

Tools like IOBit Unlocker, or the most popular "cannot delete" files" tool Unlocker, can usually resolve the situation. They unlock the file so that it can be removed from the system after all.

IOBit Unlocker has been released as a free beta version. The program adds an entry to the Windows Explorer context menu during installation that can be used to send file information to the unlocker. Files can also be added via drag and drop directly. 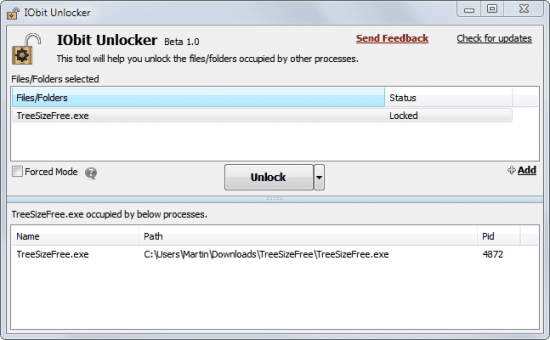 The program window displays the selected files and folders in the upper half of the program window. Each item is listed with its name and status that indicates whether it is currently locked or unlocked.

The processes that use the file are listed in the lower half along with their file name, path and process ID.

IOBit Unlocker offers two unlocking modes. The first is activated with a click on the Unlock button. The program tries to unlock the selected files. The small arrow next to the button contains options to perform a second operation, like delete or copy after the items have been unlocked.

The forced mode checkbox has been added if the standard file unlocking fails. All processes that lock selected files will be terminated if the option is selected.

How sophisticated is the beta version of IOBit Unlocker? It lacks some of the features of Unlocker, for instance the ability to delete files on the next system restart if they cannot be unlocked in the current session. For now, it is a solid alternative that lacks features. It will be interesting to see if the developers add the missing features in the final release of the application.

Interested Windows users can download IOBit Unlocker from the developer website. The program is compatible with 32-bit and 64-bit versions of the Microsoft Windows operating system. (via)