I have reviewed Shardana Antivirus Rescue Disk Utility (Sardu) back in 2009 and found it to be a helpful but complex to setup rescue disk creator. The developer has recently released version 2 of Sardu which sports new features and an improved user interface.

The portable software program offers a selection of tools that can be included in the bootable disk image or copied to an USB device. The utilities are grouped into the four tabs antivirus, utility, Linux Live and Windows PE. 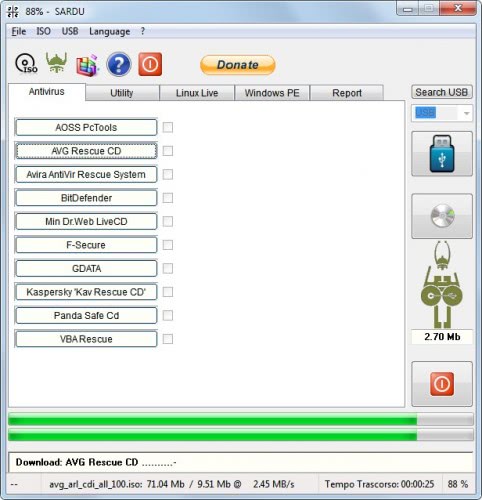 It is possible to select multiple programs of a group. The antivirus tab for instance offers to include the AVG Rescue Cd, Avira AntiVir Rescue System, Dr. Web Live Cd and the Kaspersky Kav Rescue CD among other choices. A click on a program downloads it to the local system, another click adds it to the disk image so that the rescue disk can be accessed whenever the system is booted from that CD, DVD or USB stick. A few rescue disks and programs need to be downloaded manually. A click on the program button launches a web page with the download option instead.

Sardu displays the total size of the current selection in the interface, there is however no indication of the size of individual tools. This would have been handy to make the selection process easier if there is a size limit for the rescue disk image.

Linux Live CDs can be downloaded and integrated in the third group. Popular choices include Ubuntu, Damn Small Linux, Puppy Linux or BackTrack.

The fourth and final category lists options to include Windows PE on the rescue disk. Available are Windows PE 1.x, Windows PE > 2 and Windows Recovery Disks. 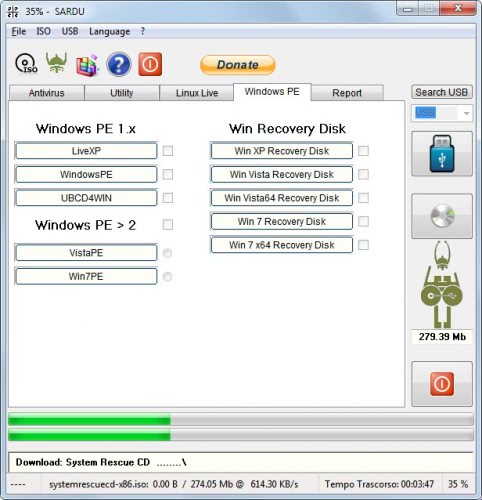 It is possible to download most of the disk images directly and place them in the ISO folder of the application. That can be helpful for users who want to download multiple rescue and system disks at once. Sardu can only download one file at a time, and downloading them externally can help speed downloads up. All images are linked on the Sardu project website.

Once the downloads and selections have been made it is time to create the iso image if the rescue disk should be burned on CD or DVD, or to copy the rescue disks to a connected USB device.

It is pretty easy to create a rescue disk with Sardu 2. The only problem that I have encountered during review is that some of the messages are in Italian, even if English is selected as the language. This has not been a big problem though as it was always clear what the notification meant. 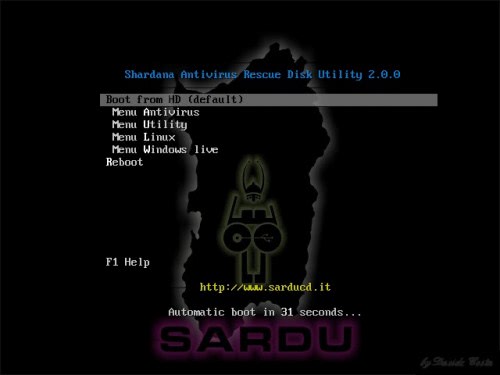