Many antivirus developers offer bootable rescue ISO images of their antivirus software programs so that users can use them to scan the computer system without having to boot into the installed operating systems. Shardana Antivirus Rescue Disk Utility combines antivirus rescue disks and system tools (like partitioning programs or boot managers) in one ISO image. This gives the user the means to run multiple antivirus rescue disks and other system tools from one disk or USB drive.

The core program can be downloaded directly from the developer's website. It does not ship with any of the antivirus rescue disks or system tools though. It is up to the user to download them individually with the possibility to skip programs by simply not downloading them.

The program itself is divided into four tabs that list the various tools that are supported by the antivirus rescue disk. The Italian interface can be switched to several other languages. A click on any entry will open a website with download possibilities. Some websites are also shown in the Italian language but it is usually not a big problem to change those to another language like English or German to download the tool in the right language.

The downloaded images and tools have to be placed in the right directory so that the program will recognize them during the creation of the bootable disk image. Here is the list of supported antivirus rescue CDs and other tools:

The program offers then to create either an ISO image which can be burned to CD and DVD or to make to copy the files to an USB device and make that device bootable. 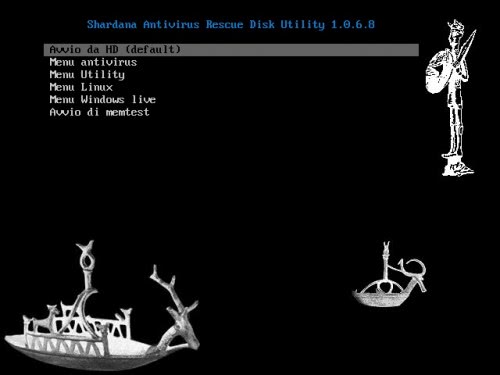 Shardana Antivirus Rescue Disk Utility is slightly more complex to setup initially. The tools that are combined on the disk or USB device on the other hand might make it an interesting option for users who usually run multiple antivirus programs and utilities in situations where they are needed.

The program can be downloaded from the developer's website.