Game Anywhere is another software program for the Windows operating system that can be used to create copies of game saves and configurations. It works in this regard much like the previously reviewed Game Save Manager but with the major difference that it stores the game save and configuration information in the cloud. This indicates that it is necessary to create a user account before the program can be used. The account can be created directly in the software program where only a valid email address and password need to be entered. A verification email will be send to that email address and the link in that email needs to be loaded before the account can be used.

Game Anywhere supports nine games out of the box: Abuse, Borderlands, Dragon Age Origins, FIFA 10, Football Manager 2010, Football Manager 2009, The Sims 3, World of Warcraft, Warcraft 3: The Frozen Throne with the option to add additional games so that their saves and configuration files are backed up as well. 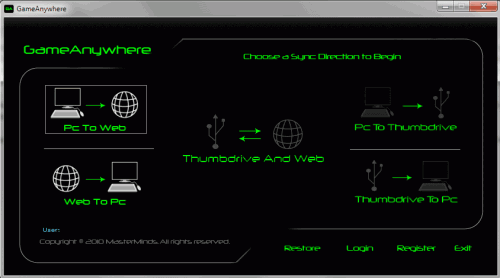 The process again is more complicated than the one offered by Game Save Manager. The user of Game Anywhere needs to edit the userGames.txt configuration file to add new games so that they are recognized by the software.

The program interface of Game Anywhere lists options to synchronize game saves with a thumbdrive as well. It was however not possible to select those options.

Game Anywhere is a interesting alternative to Game Save Manager. The developers should consider making the program more user friendly by adding the ability to select game save and configuration files directly in the program interface.

It would also be nice if local data storage could be selected that does not need an account.

Game Anywhere can be downloaded from the developer's website. The game save and configuration manager requires the Microsoft .net Framework 3.5.

Update: Game Anywhere is no longer available, the website returns a 404 not found error. I suggest you try the linked Game Save Manager instead.