Most computer users do not change monitor resolutions frequently on their computer system. They usually run the native solution and have no need to change it.

But developers, webmasters and advanced users might have the need to switch to different resolutions regularly. They can naturally do that manually, but that is not the fastest way of changing the monitor resolution. If it has to be done a lot, it quickly becomes annoying and time consuming.

Enter Hotkey Resolution Changer. It is a small portable AutoIt software that can be used to configure keyboard shortcuts for monitor resolutions. 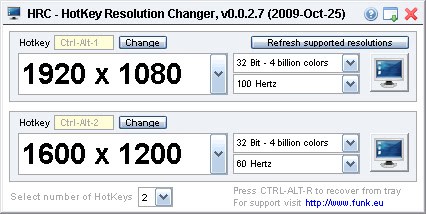 The program places an icon into the system tray on launch.A left-click on the system tray icon opens the configuration interface of Hotkey Resolution Changer. You may use it to map hotkeys to resolutions so that you can switch between them easily.

Note: You may use the shortcut Ctrl-Alt-Shift-R to restore the initial resolution of the display. This is useful if you run into issues setting certain resolutions on the monitor.

A total of nine different monitor resolutions and hotkeys can be configured in the program. Supported are resolutions of 800x600 and above with maximum frequencies of 100 Hertz. Apart from that, you may also set the color bit rate for each resolution.

Users who need lower resolutions or more Hertz can edit the source code of the programand compile it to have those values at their disposal. The color depth can also be defined for each configuration individually.

It has to be noted that the application does not support multi-monitor settings at this time. Hotkey Resolution Changer is compatible with 32-bit and 64-bit editions of the Windows operating system. It can be downloaded directly from the developer's website. The program source code is available there as well. 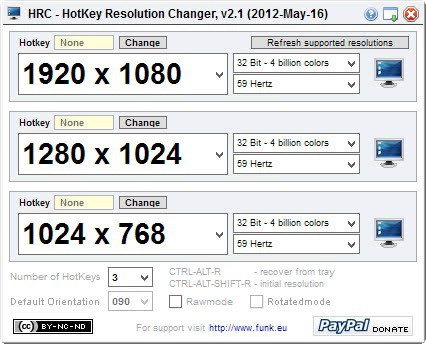 Update: The latest program version supports resolutions of 640x480 and larger, and frequencies up to 120 Hertz. Also new are options to change the default orientation, and options to enable Raw mode and Rotated mode.

Several new versions of Hotkey Resolution Changer have been released in the meantime, which mostly consisted of bug fixes. No new program functionality has been added.