Every web browser offers some form of ad-blocking functionality which blocks advertisement and commercials from being shown when websites are loaded in it.

Firefox users have adblock plus or Noscript, Opera users have a built in option to block elements or BlockIt, Google Chrome users have also the choice between multiple ad blockers and Internet Explorer users can either use a plugin like Adblock IE or make use of the restricted zones to block specific hosts on the computer.

The last solution is being used by the small application IE Commercial Remover which adds known advertising hosts to the restricted zone so that connection attempts to those hosts will be rejected by the web browser. This in return means that the ads that should be displayed on the website will not be displayed due to that.

The portable software program displays a simple interface upon startup. Its three buttons can be used to add the filters to the restricted zone in Internet Explorer, remove the filters again and to close the application.

IE Commercial Remover is a simple small application that can add a wide range of servers to IE's restricted zone sites. This prevent the servers to communicate with IE. The result is that no banner or other commercials (flash etc) will load from these sites. - It is all done with one click. The application does NOT come with an installer (it is not required) - Simply run the file, and click on Add Filter to IE, and you are done. 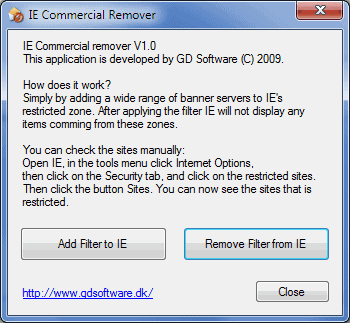 The program will add a total of seven different ad serving hosts to the restricted zone in the web browser. That's not much considering that usual ad blocking lists contain hundreds of hosts. The method itself however is less intrusive than installing a plugin or third party software to handle ad blocking.

And since you know of the method know, you can add custom hosts to the list easily to block additional domains from delivering advertisement to your machine.

IE commercial Remover can be downloaded from the developer's website. The developer does not provide compatibility information. It worked flawlessly on a Windows 7 Professional test system.

Update: The most recent version of the application offers a third button that its author has added to it. It allows you to see the list of sites that will get blocked when you click on the add filter to IE button in the program interface.

This is useful as it provides you with a way to check the domains before you add them to Internet Explorer's restricted zones profile.