FavBackup is a specialized backup software that has been designed for web browser's specifically. Our previous review came to the conclusion that FavBackup is best suited for backing up one or multiple web browser profiles on the local system. We criticized some missing feaures in our initial review, like missing support for custom and multiple user profiles, support for portable web browsers, or the high disk and memory usage during the backup job

The developer of FavBackup has recently released version 2.0 of the backup software which addresses the majority of issues that we criticized previously. 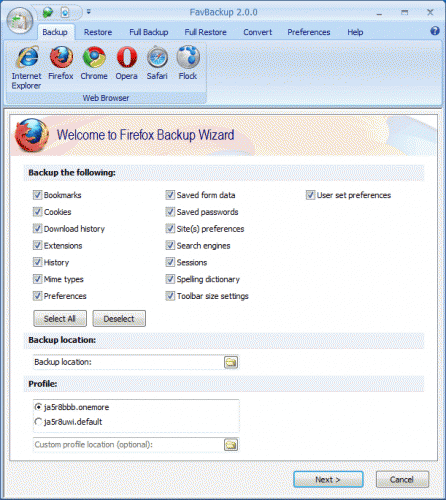 Other changes in this release are the new ribbon interface, a progress bar, different themes for the backup program, 40% less computer memory usage and minor bug fixes. The new additions make FavBackup 2 a recommended program for web browser backups, especially if multiple different web browsers are installed and used in a computing environment.

The program has not been updated for the last ten months which means that new browser versions released in that time are officially not supported. It should however work fine with most versions that got released.