The Internet is full of software programs that promise to optimize, repair and test the Windows operating system. There are actually that many of them that it becomes hard to keep an overview of the programs available. Rizone's Power Tools is the newest addition to that niche. It's benefits to the computer system become apparent immediately after downloading and unpacking it. The portable program uses a clean and very responsive interface.

The program window displays relevant information about computer memory and virtual memory usage as well as information about the primary hard drive of the system (with options to switch to other connected drives). The number of objects and their size in the Windows Recycle Bin are displayed as well.

Drive management and memory optimization options are provided in the same window. A one-click solution so to speak to check, format, defragment and analyze a connected hard drive or to optimize the memory. Buttons pointing to the task manager and command prompt are offered in the same window as well. 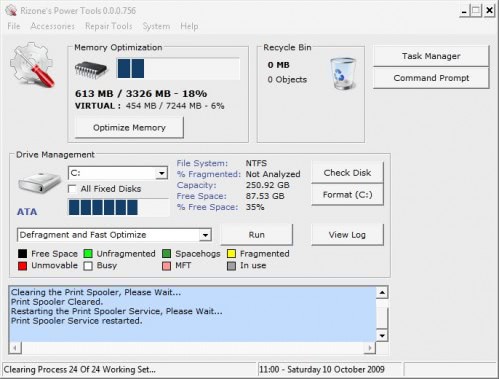 Rizone's Power Tools offers an impressive list of features considering that it is a early prototype build. The developer promises to include additional features in upcoming releases. Definitely a software program to look out for.