They can be used for example to visualize how users access applications or websites. This makes them an extremely popular instrument for usability studies.

The Heatmap Studio is a software program for the Windows operating system that can generate heatmaps from three different types of data.

The first from applications that are monitored over time, the second from Google Maps and the third from an already existing set of data. 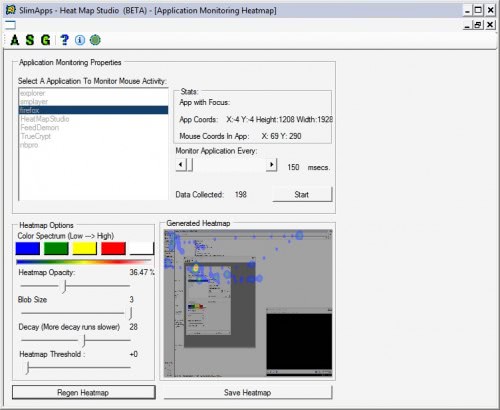 The application monitoring heatmap module will display a list of all applications that are currently running on the computer system.

It will monitor the mouse every 150 milliseconds by default, a value that can be changed to a new value between 1 and 4901 ms.

The heatmap monitoring process runs after you click on the start button in the program interface.

Heatmap Studio will record the mouse movement and display a visual representation of it in the end. Several parameters of the heatmap can be changed once the monitoring period has ended.

The two other heatmap types work with data sets that need to be imported into the software program. The data set must fit the selected heatmap type. For Google Maps heatmaps it would mean to import a two or three column dataset with latitude and longitude while the standard heatmap requires an image for the heatmap and a dataset that is made up of standard x,y coordinates.

Heatmap Studio requires the Microsoft .net Framework 3. and is compatible with most Microsoft Windows operating systems.

Update: Heatmap Studio is no longer available. We have removed the link pointing to the homepage of the program as it is no longer registered to anyone.

We suggest you try out the following alternatives instead:Â  Gheat for Google Maps heatmaps, Cannoli for a Ruby on Rails heatmaps generator, or Clicktale or a comparable service if you want to create web heatmaps.

Previous Post: « Dud Is A Program That Does Nothing
Next Post: « Microsoft Security Essentials Beta Now Available