Here is a quick tip for the Windows operating system that might come in handy in certain situations.

On most Windows systems one or multiple programs are usually set to autostart with the operating system. This makes sense for security software for instance, as it can start protecting the system as soon as it is loaded.

Other programs that get loaded on startup on the other hand may affect the system in a negative fashion which is especially problematic if these programs are not used regularly on the system.

Each program that gets loaded during start of the system will slow down the start of it. Some will do so noticeable while others may only add milliseconds to the start.

While it is recommended to go ahead and sort these things out by removing any program from autostart that is not really required right after system start, using System Explorer or Autoruns for instance, it is not done on most systems regularly. 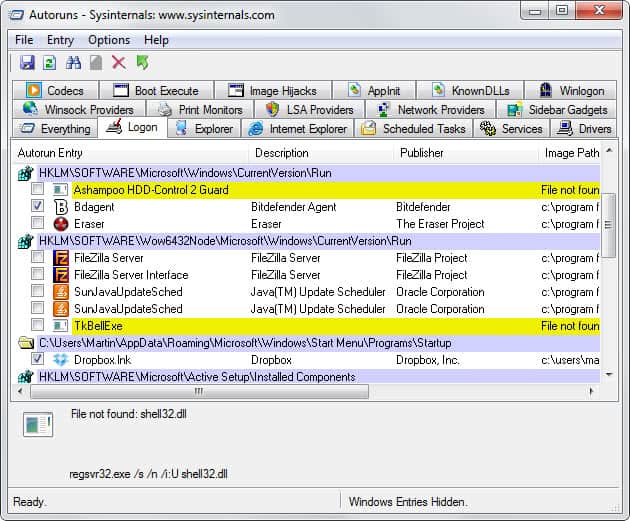 Some users may want to skip loading these autostart programs from time to time to speed up the loading of the operating system or to bypass a program that is causing the system to load slowly or not at all. Note that the following tip works only when you are running Windows XP and not in newer versions of Windows such as Windows Vista, Windows 7 or Windows 8.

To start Windows XP without startup programs press the [Shift] key while the computer system is booting. You need to hold down the key as soon as the Windows desktop appears on the screen. If you do it right, all autostart programs won't be loaded during system start. You may need to practice this a couple of times before you get the timing right for it though.

If that sounds too complicated, you may want to take a look at Capster, a free program for Windows that will load the autostart applications only if the Caps Lock key is on. If it is turned off, no autostart entries are loaded.

Update: Unless you load lots of programs on system start in newer versions of windows, you may not see a huge benefit by disabling autostart for a session since newer versions of Windows load a lot faster than older ones.

Another issue with the approach is that you disable all entries including security related software that you may not want disabled.

Article Name
Start Windows Without Autostart Entries
Description
Find out how to load Windows XP without any of the system's autostart entries.
Author
Martin Brinkmann
Advertisement

Martin Brinkmann is a journalist from Germany who founded Ghacks Technology News Back in 2005. He is passionate about all things tech and knows the Internet and computers like the back of his hand. You can follow Martin on Facebook or Twitter
View all posts by Martin Brinkmann →
Previous Post: « Remove Broken Shortcuts From The Windows Start Menu
Next Post: FBackup Plugin Based Windows Backup Software »