Homedale is a Wi-Fi networking monitor

Homedale is a free wireless networking monitor for Windows that you may use to monitor WiFi access points and their signal strength.

Not all wireless networking hardware comes with the appropriate software to monitor the available networks in the vicinity, and the same is true for the default networking software that comes with operating systems such as Microsoft's Windows OS.

The software that comes with the operating system is usually pretty basic as well and does not provide extensive means - or none at all - to monitor parameters like signal strength over time.

Homedale is a portable wireless networking software for the Windows operating system that can best be described as a WiFi monitor. It displays all available access points in its interface, and keeps a record of the signal strength of each over time.

It uses a tabbed interface that displays information on local network adapters, the available access points, and the signal strength of each access point.

The wireless networking software can be used to monitor the signal strength of selected wireless adapters over time which makes it an excellent analysis tool especially for small and medium computer networks.

You can use it to keep an eye on your own network, or networks in the vicinity, for instance to make sure that there is as little overlapping in regards to channels used as possible, or to find out why performance drops at specific times of the day. 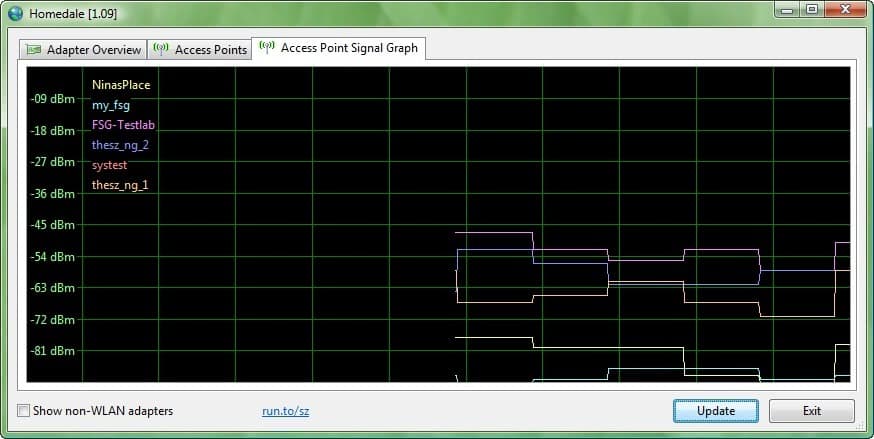 It is recommended for instance to use different channels than other wireless networks that overlap with your own hardware to avoid performance or connection reliability issues.

Homedale has a size of less than 300 Kilobytes and uses roughly 5.5 Megabytes of computer memory while running in the background. The software developer does not provide information about supported operating systems but it ran without problems on a Windows XP SP3 and a Windows 7 test system.

Another interesting feature that Homedale provides you with is the ability to connect to any of the networks with a right-click and the selection of connect from the context menu. And if you are already connected, you can use it to disconnect from a network at any time as well.

An alternative for Windows users is Wi-Fi Signal Strength. Linux users might want to take a look at Wavemon which can display advanced wireless information.

Homedale is a powerful software program for Microsoft Windows devices to retrieve information on all access points that are picked up by the wireless sensor. It enables you to monitor the signal strength of each over time, and adjust parameters such as the channel used to avoid conflicts with other access points.

Previous Post: « Back up your files to a secure remote server with Carbonite
Next Post: P2P: The Owner Free File System »