OFF-System, which stands for Owner Free File System, is a distributed system which uses peer to peer technology for distributing files.

Peer to peer networks are often associated with the dark side of the Internet as they became widely known for listing and making available large numbers of commercial files to anyone with the right tools to access these files.

File sharing on standard p2p networks like Bittorrent is not anonymous as IP addresses are visible once a connection is made from a client system to a network. While there are ways to overcome this, by using VPN software or proxies for instance, it is still at least in theory possible to trace back individual users. 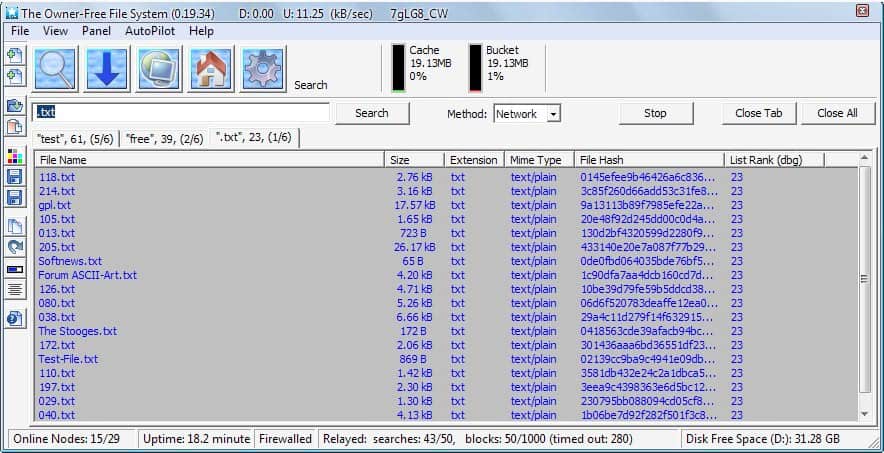 The OFF-System is a peer to peer networking system that uses a different approach when compared to darknets such as Freenet.

Darknets anonymize user data, while the Off-System creates randomized multi-used data block instead which makes it impossible to map data blocks to a single file on the network.

To retrieve data from the peer to peer network one would need to download all required blocks plus the so called retrieval url which is created when files are added to the network. Each block on its own is nothing but a set of random data which means that this data does not fall under copyright, and cannot be used to identify files that are downloaded or shared.

The developers have a multi-page article on their website that describes the system in great detail.

Users on the other hand can simply download the Open Source client of the Off-System which comes with a comfortable search function build in.

The options are quite extensive ranging from incoming and outgoing filters, security settings like trusted nodes to networking and advanced options. There is usually a overhead involved when replicating files which can range from a 50%-200% file increase on the receiving end though.

Update: OFF-System has not been updated since 2008. While you can still download the latest release version of it from the project's SourceForge page, it is a given that the project is dead at this point in time.