Another interesting Windows software application came up in the Donation Coder forum the other day. A user was asking for an application to maximize part of a window or control to fullscreen with the option to return it to its initial position later on.

Eric Wong who already contributed quite a few applications mentioned his software program Windows Extractor which can be used to easily extract controls, elements and windows from the parent application and provide access to them in their own window which can either be displayed in fullscreen right away or the default size which allows for resizing and moving the extracted window contents.

Windows Extractor offers some interesting applications. It is for instance possible to extract videos out of websites and play them in their own window. Even more interesting is the option to move windows and controls out of applications.

Imagine extracting a window out of an image editor like Adobe Photoshop or software development application like Visual Studio and moving that window to a second monitor screen. 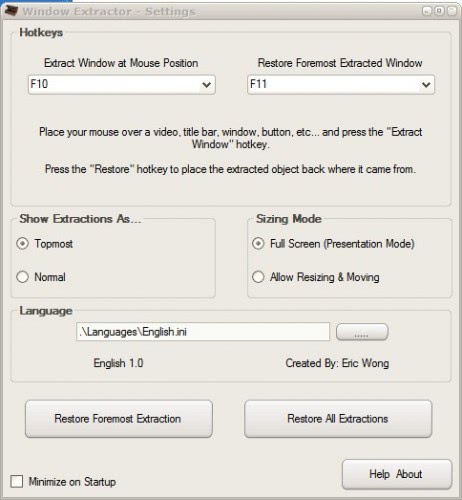 Working with Windows Extractor has been designed to be as simple as possible. The application uses two hotkeys to extract windows at mouse position and restore the extracted window back into its original interface. The F10 key extracts the window at mouse position while F11 restores its position. The hotkeys can be changed in the program interface. 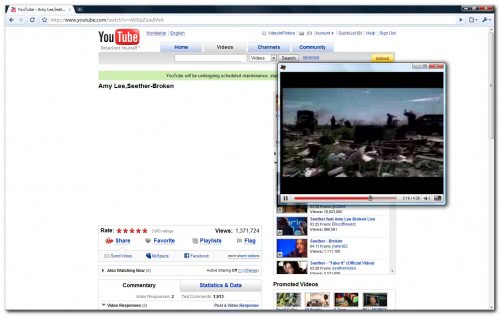 Two sizing modes are available: Full Screen and Windowed. Full Screen mode will show the extracted window in fullscreen while the windowed mode allows for resizing and moving. It can happen that the program crashes if a Window cannot cope with the extraction.

Windows Extractor requires the Microsoft .net Framework 2.0 or higher and compatible with 32-bit and 64-bit editions of Windows XP and windows Vista. The Source Code is provided on the homepage of the software program as well.