This was sometimes caused by applications that have been started, but the rest of the time by something that I could not figure out no matter how hard I tried to troubleshoot the issue.

For those who do not know, you can configure the taskbar to automatically hide when the mouse is not on it. This can be beneficial since you get some extra space for content on the desktop. If you want to try this right-click a free location on the taskbar and select properties from the menu. Check the auto-hide the taskbar option here and click ok. 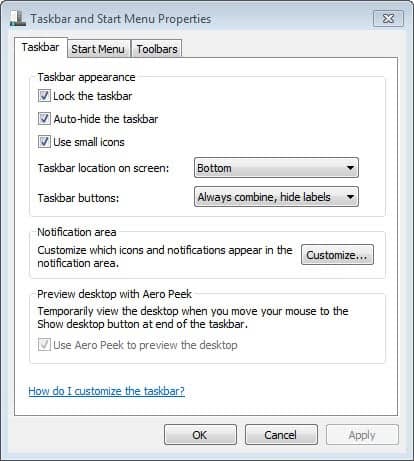 Even closing all applications and windows did not make the Windows Taskbar auto-hide anymore.

That's extremely frustrating for a user who has the taskbar on the left side of the screen. I was not able to maximize windows anymore because the taskbar would overshadow part of the window.

After searching around for some time I discovered a script at Kelly's Corner that would restore the Windows Taskbar functionality to the default values.

The Windows Taskbar is reset to its default values when you run the script. The script will also restart explorer.exe automatically so that the changes become visible right away and not only after you log out and on again or restart the PC. Note that the taskbar is moved to its default location again when you run the script since you reset all values, and that you may need to configure it again so that it is displayed the way you want after the reset.

What can I say: The script worked. My Windows Taskbar is auto-hiding again and I did not discover any problems so far with it remaining in the foreground. The script was designed for Windows XP only.

Update: While designed only for Windows XP, the script works fine in newer versions of the Microsoft Windows operating system as well.

Update 2: Kelly's Corner is no longer available. We have uploaded the latest version of the Taskbar script to our own server. You may download it with a click on the following link: Taskbar Desktop Fix