When you open My Computer you see floppy disk drives, hard drives and DVD drives. Lots of space is wasted in that window and you have to click several times to reach the location that you want to open in first place.

If you do have folders on your hard drives that you use over and over again you may want to consider creating folder drives which would make them appear as drives in My Computer.

What this does basically is link drive letters to folders so that they appear directly in Windows Explorer.

The main benefit is of course that you can access those folders much faster without having to click several times. Windows has a build in command line tool that can do this but I prefer to use XSubst which has a graphic user interface and offers the same functionality.

You select an available drive letter in the Xsubst application and clicks on the Connect button afterwards. This opens a Browse for Folder window. Just select the folder that you want to display as the drive letter that you have selected before. Those links between the drive letter and folder are not permanent unless you press the Permanent button in XSubst. 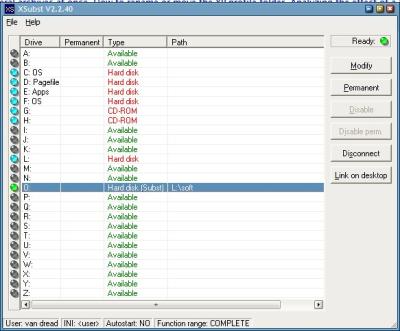 The permanent setting and the drive letter can be removed again using the Xsubst software as well. I use Xsubst mainly for two folders that I access several times a day, saves me some time every time I access them this way.

While it is great for accessing specific folders quickly while you are browsing Windows Explorer, it can also be useful if you need to load them in programs or use them in other ways.

Instead of having to use the long path on the command line to load a program or execute a command on that folder, you simply use the drive letter and save lots of typing there.

The same is true for path variables that you may need to set.

Note that newer versions of Windows Explorer come with options to add favorites to it in a sidebar. While this may ease the trouble of browsing Windows Explorer, it won't do you nay good on the command line or third-party programs as they don't change the location of those folders on your system.

Xsubst is a great program that is easy to use. If you want to add a drive link to specific folders, this is the program that is probably the most comfortable option to do so.