I seldom come upon a great freeware game with stunning graphics, gameplayer and multiplayer action. Bang Howdy has all of that and much more featuring fast turn based action with a twist. The excellent tutorial covers all basic game elements and describes the various game modes that are available when playing online. All players choose a number of units before the game starts who all have advantages and disadvantages against certain types of units for example.

The original game featured four game modes and the first add-on features three more. It would take to long to describe each possible scenario but I would like to write about one to explain the game mechanics.

In the Claim Jumping scenario players try to bring gold nuggets that they find in the level or steal from the enemies gold mine to their own to receive points. Your units have to defend the own gold mine to prevent the theft of gold nuggets from it and use some units to find or steal gold units and bring them back to the own mine. 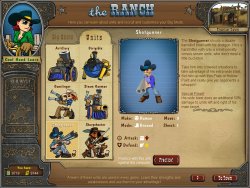 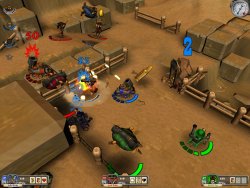 Dead units will respawn after some time next to their own base. Bonus items appear from time to time on the map and have several positive effects if a unit walks over them. This could range from healing to bonus cards that do area damage.

Players earn scrip after each scenario which can be exchanged to gold to buy bonus cards or unlock special units. Badges are given out to players when they complete special tasks which can also unlock units or add options to customize the game further. Bang Howdy requires the Java Runtime Environment.

Update: The game is still available as of today, but development seems to have stopped in mid 2010. The official forum seems to have a spam problem, another indicator that the developers of the game have abandoned it.