Game for the Weekeend Rumble Box

Rumble Box is a great freeware beat em up game which uses characters made of cubes and balls. Controls are pretty easy to figure out. Use the arrow keys to move your character, double tab forward for a dash, press the spacebar to hit and use Control to grab. The enemies enter the level through doors that appear in the walls that limit the box that you are fighting in. Defeated enemies stay in the level dispelled into the objects that they were composed off.

The ultimate goal of the game is to pile up enough enemies in the level to exit the box that you are in. Every now and then you enter certain bonus stages to earn extra points. The game looks and plays great. It is fast paced and lots of fun.

There are four types of enemies the game throws at you. 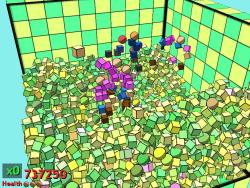 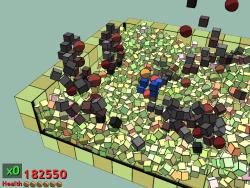 As far as tips go, you should stay away from bombs as their blasts can result in game over if you are standing to close to them. You can press attack to do a spin throw while holding enemies, and attack while dashing for some fast dash attack moves. If you are a score junkie, you should know that your score multipliers increase more the faster you defeat enemies.

The PC game has a size of 11 Megabytes, and can be downloaded from the developer website linked above. It requires at least a 1 GHz processor and a DirectX 9.0 compatible video card.

Rumble Box is a single player game only game that you can download directly from the developer website. It has a size of 12 Megabyte and should run fairly well on modern - and not so modern - hardware.