The Blob game - paint the city

I think I found a reference to the blob game on the donation coder blog. The task of the freeware game sounds simple enough: collect colors and use them to colorize the city that you are in.

You, the blob, roll around in the city and absorb the colors of non player characters that roam the streets. Colors get mixed if you absorb more than one of them and run out after a certain time of rolling around and coloring objects.

Beware the black creatures that clear every other color on your blob. You need to cleanse the blob with water before you can absorb new colors. The main goal of the game is to paint the 17 landmark buildings but you could also try and collect all 50 coins which are scattered throughout the level.

There is no real story and the only one level but the game is still worth the download. It is fun and could be a nice game for children as well. 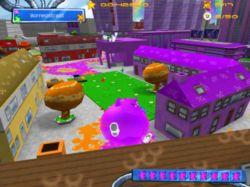 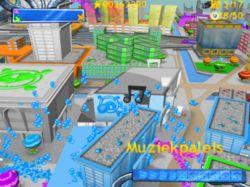 Here is a short video of the Nintendo Wii version of The Blob. Note how similar it looks to the free PC version of the game.

It is interesting to note that the PC version remained as a free download even after The Blob 2 got released for video game systems. The biggest issue of the PC game version is that it only consists of that one level, and while that is still fun to play and all, it lacks surprising elements or new game elements.

Its peaceful nature, shiny colors and lovely town makes it ideal for children of all ages. Since there is no real way to fail in the game and no time-limit either, it is more of a virtual sandbox that you play in than a game. Still, definitely worth to try out and if you like it, buy the commercial game as well.