Sudoku is an addictive puzzle game which became popular in Europe just a few years ago.The goal of the game is to fill out a 9x9 grid with the numbers 1 to 9 so that each number is present once in each row, column and 3x3 sub-grid.

The concept itself is pretty simply even though the game may not be depending on the starting numbers and positions on the board. Basically, the less numbers you get to start with, the more difficult it becomes.Easy Sudoku puzzles can usually be solved by eliminating all possibilities but one for a specific square of the board. Harder maps on the other hand require you to think around corners and play through possible scenarios to come up with the right solution which can be quite the challenge.

Portable Sudoku does not require installation and can be stored on an usb stick for instance or on any other location on your computer system.

The game is automatically saved when you exit it and it has some modes that make life just a bit easier. Check mode checks the numbers that you have entered thus far. Solve game on the other hand solves the complete game which could be nice if you are stuck and can't continue on your own. The download is only 400k in size and available for windows. 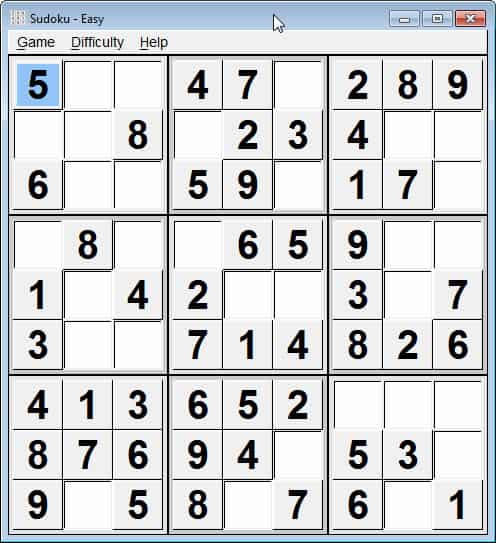 You can iterate between numbers by left-clicking into free fields, or use numbers on the keyboard instead if you prefer to enter numbers this way. If you have made an error you can hit Del to remove a number that you have entered previously from the puzzle. You can furthermore restart a level at any time with a click on Game > Restart Game or the Ctrl-R shortcut which does the same thing.