Game for the Weekend Alien Arena

Code Red Alien Arena reminds me a lot of the first Unreal Tournament and Quake 3 Arena games that came out. I think I was addicted to Unreal Tournament in 1999 playing in a high skilled CTF clan for more than a year. It was tremendous fun and we were all pretty disappointed when the successor brought shiny graphics and shitty gameplay to the community.

Alien Arena has nice enough graphics for a freeware game but the most important aspect is of course the gameplay. What can I say, it is fun.

You can either try your luck in Deathmatch against bots or play on the internet against real opponents. Everything that made UT and Q3 so popular is included. Fast paced action, different weapons, great levels and a thriving active community which for instance creates new maps.

The game is available for Windows and Linux which is another big plus for me. This is a great game for a freeware production. Hope you all enjoy it. 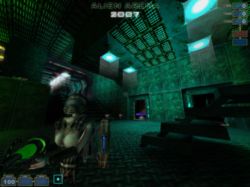 Update: The game is still being worked on. The latest version was released in October 2011. It brings the game to version 7.52.

A lot has changed since the time of the first review. Especially the graphics and physics side of the game has been improved with better models and textures, improved visuals and better performance.

Here is the official Alien Arena 2011 Trailer that you can use to see the difference between the original game and the latest version.

The game is still a fast paced action game that is very similar to Unreal Tournament 99 and Quake 3 Arena. Graphics are good but pale in comparison with commercial action games. Alien Arena on the other hand is a free open source game that everyone can download and play directly.

Note that the game is a multiplayer game that you play only, there is no single player campaign that ships with the game. You can download the game's source code as well as extra content from the Alien Area website. This includes additional maps and other data that improve the game.