It seems that everyday a new tower defense game appears on the Internet and gets linked pretty quickly. I found reference of the game Curator Defense on the Dnation Coders blog and can absolutely recommend it. You have to download approximately 50+ Megabytes but the download is well worth it. Pieces of art invade the museum and you have to stop them to prevent that they replace the real art on the museum's walls.

It sounds pretty silly but it is actually tremendous fun. You have to place certain structures to slow down and destroy the art that is invading the museum. Destroyed art and the end of a wave adds credits to your account and you can purchase more and better stuff to fight the tougher waves that come in later.

I was getting best results by using connected rows of sharp banisters with stop signs, ghost detectors and of course the various cannons. It gets tough pretty fast even on easy difficulty level, did not pay attention how far I made it but I think it was around 15-20. 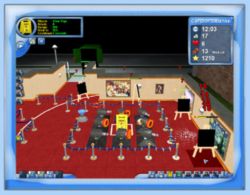 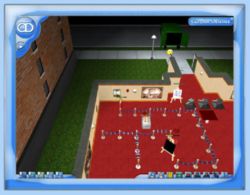 If you have never played tower defense games before let me explain the concept. Your task is to keep waves of enemies from reaching one or multiple exits in a level. To do that, you can place objects on the map that serve different purposes like attacking enemies when they come in range, slowing them down, or blocking them from reaching the exit to quickly. Many tower defense games require you to build a maze so that enemies have to pass a longer distance before they reach the exit.

Curator Defense has a lot to offer, and I suggest you start by looking at the various tower and enemies that you will encounter in the game. The game offers three difficulty levels and a non stop mode that pits you against endless streams of enemies.