File Verifier++ is a portable software program for Windows that can check the file integrity of selected files. This is done by calculating the hash of every selected file on the first run of the application and comparing that initial hash value with the hash that is calculated at a later time. Files have likely been modified in the meantime if the original match and the recent hash do not match.

The software program does not work automatic, you have to select the files or folders that you want to create hashes for manually. These are then stored in the program database as records, that you check against at a later time to see if files have been tampered with in the meantime.

A set of 21 different hash algorithms including popular algorithms like MD5, SHA-512 or CRC-32 is available and at the user's disposal. Results can be saved or loaded so that they are available whenever they are needed. 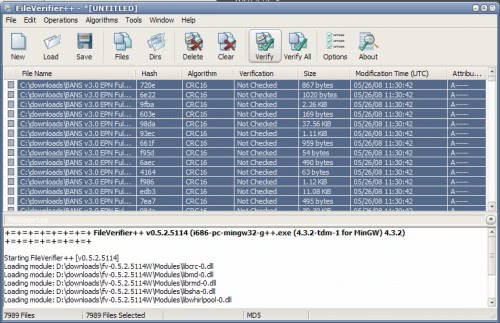 Other interesting options include Windows Shell integration, a command line version, drag and drop support, Unicode support or search and grep using regular expressions. All in all a very sophisticated tool to check the file integrity of selected files.

You can use the program for verification purposes as well. Say you are preparing to burn a data CD and use the program to generate hashes for all files that you burn on the CD. You can then rerun the generation at a later time comparing the files on the CD or DVD with the previous data set to see if files on the CD have become corrupt in the meantime. Webmasters can generate hashes of their web projects or web server files to check them regularly to make sure that hackers did not manage to sneak in and change the contents of files on the server.