Find out for how long your Windows 11 version is supported

Microsoft released the first feature update for its Windows 11 operating system on September 20, 2022. It includes improvements and new features, and while it may be tempting for some to upgrade right away, it is usually better to wait some time before hitting the upgrade button.

One of the main reasons for that is that bugs may be reported to Microsoft, now that millions of devices do get updated. These may range from harmless issues to major ones.

Some Windows 11 customers may also wonder for how long their particular version of the operating system will be supported by Microsoft. Windows 11 itself won't run out of support anytime soon, but individual feature updates or the release version will.

How to check the installed Windows 11 version 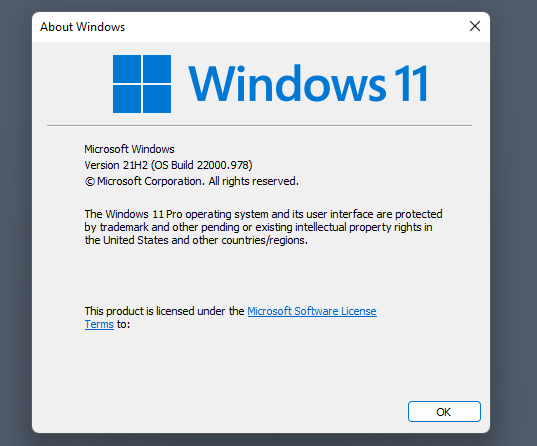 One of the easier options to find out about the installed version is the following one:

Winver displays the windows version in a small window.  In the screenshot above, it shows Windows 11 version 21H2, the initial release version of the operating system.

The Settings app displays the version as well:

Microsoft has not announced a retirement date for Windows 11, but individual versions of the operating system have end of support dates. The following information applies to the following Windows 11 editions: Home, Pro, Pro Education, Pro for Workstations, SE.

Now You: which version of Windows do you run, and why (if any)?

How to enable startup app notifications on Windows 11