How to remove the new Microsoft Edge if uninstallation is blocked - gHacks Tech News
ghacks.net

How to remove the new Microsoft Edge if uninstallation is blocked

Microsoft started to push the new Chromium-based Microsoft Edge web browser via Windows Update to Windows devices. The company made the decision to roll out the web browser over time to monitor the distribution.

The browser would be pushed to systems only if Microsoft did not detect its installation already on the system. Interested administrators could install the Chromium-based Edge manually on supported systems prior to Microsoft starting the migration via Windows Update.
Windows updates such as KB4541301, KB4541302 and KB4559309 replace the classic version of Microsoft Edge with the new version. While there are ways to prevent the installation of these updates, it is likely that the new Edge will be pushed via Windows Updates to the majority of Windows systems; and yes, that includes unsupported Windows 7 installations.
The new Edge is undoubtedly an improvement when compared to the classic version, and there are probably only a few users out there who prefer the classic version. Many users are probably indifferent to Edge as they use other browsers.

If Microsoft Edge is installed via Windows Updates, then it is not possible to uninstall the browser using the Apps interface of the Settings application or the dedicated Software Control Panel application. It is unclear why Microsoft made the decision; a likely explanation is that users would end up without a version of Edge on the system as the classic version is removed when the new is installed. There is still Internet Explorer available as a last resort though.

Some Windows users may prefer to remove the newly installed Microsoft Edge browser again from the system. While that cannot be done using standard uninstallation options, it can be done by running a single command from the Command Prompt or a PowerShell window. 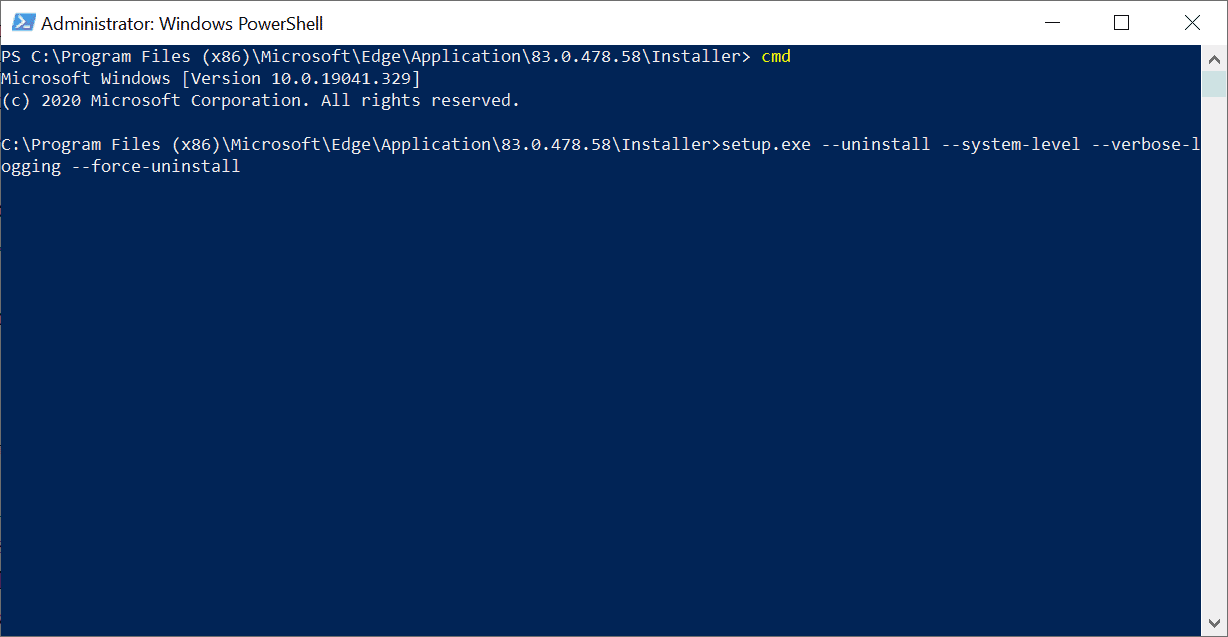 Note: We suggest that you back up the main system partition before you run the command. While it should not have any adverse effects on the system, it is always better to have a backup at hand that you can restore.

The Chromium-based Microsoft Edge web browser is removed from the system when you run the command.

The new Microsoft Edge browser is no longer on the system, and the classic Edge is not either. It is possible to install the latest version of Microsoft Edge manually from the official download site though; this allows you to uninstall the browser at any time just like any other installed browser on the system (with the exception of Internet Explorer). Another advantage of the manual option is that you can select the channel that you want to install, e.g. Beta or Canary instead of Stable. The option is also available if you keep the Windows Update version of Microsoft Edge (apart from Stable).

Now You: Have you tried the Chromium-based Microsoft Edge browser? (via Deskmodder)

Article Name
How to remove the new Microsoft Edge if uninstallation is blocked
Description
Find out how to uninstall the new Chromium-based Microsoft Edge web browser on Windows systems if the default ways of removing the browser are not available.
Author
Martin Brinkmann
Publisher
Ghacks Technology News
Logo