Manjaro 20.0 Linux distribution has been released

Manjaro 20.0 codename Lysia has been released on April 27, 2020. The release is the second big Linux release in a short period of time (Ubuntu 20.04 LTS was released last week).

Interested users can download full and minimal ISO images from the project's official download site. Manjaro 20.0 is offered in KDE Plasma, XFCE, GNOME and Architect as well as Cinnamon flavors.

The Xfce version of Manjaro 20.0 remains the project's flagship version; users who are new to Manjaro may want to start using it unless they have prior experience with other desktop environments and prefer a different one.

Tip: Mike picked Manjaro as the go-to Linux distribution for Windows users who wanted to switch to Linux. If you do, you may find his guide on post-installation steps useful. 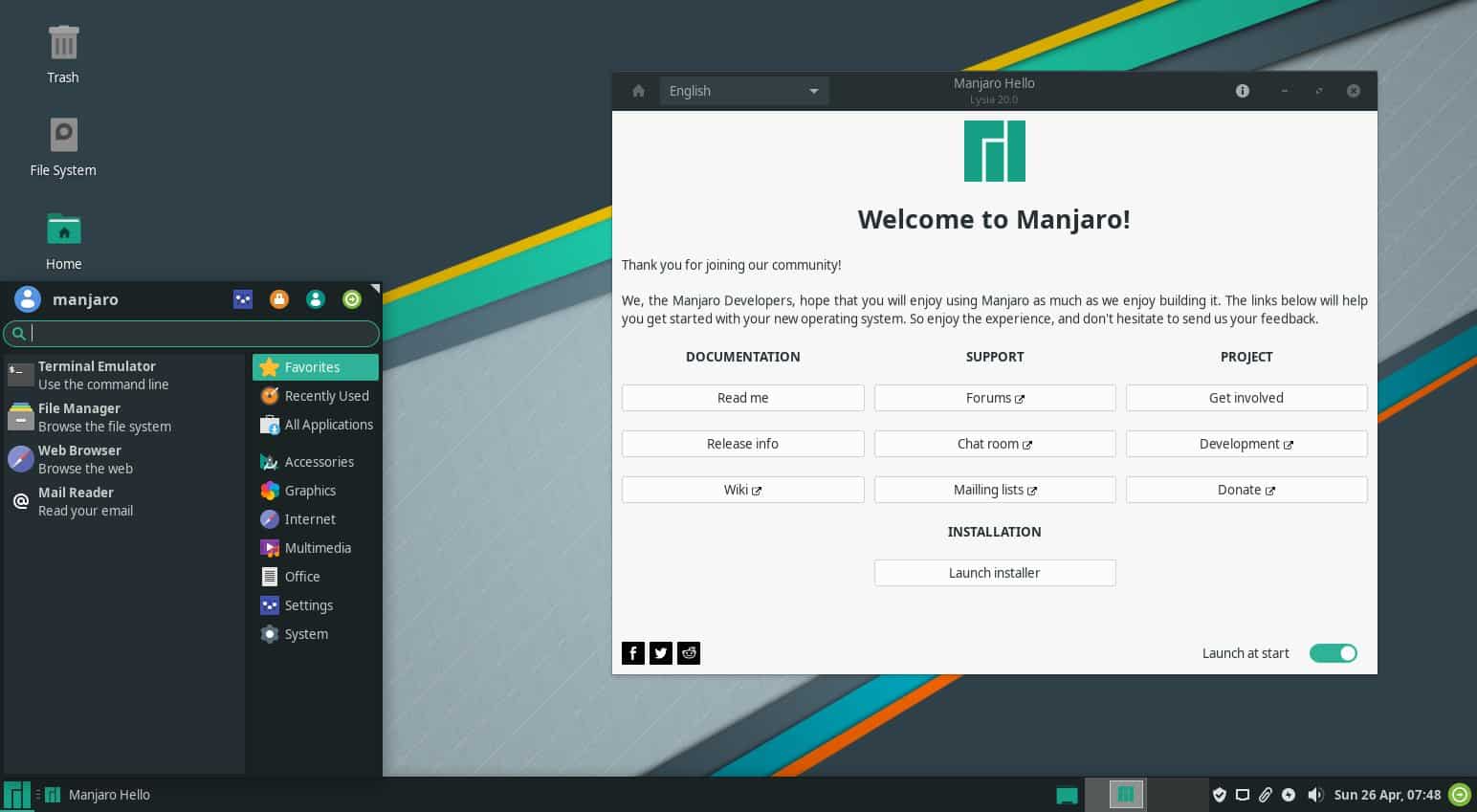 The new release uses Linux Kernel 5.6 and the latest drivers that are available as of the date of release. The Xfce release includes Xfce 4.14 and work went mostly into improving the desktop experience and window manager experience for users. The release introduces support for the new Display-Profiles feature that enables users to store display configuration profiles for easy switching (including automatic loading of profiles when new displays are connected).

The KDE version comes with Plasma 5.18 which the team re-designed completely in 2020. The Breath2 themes include light and dark themes, skins, an animated splash-screen and more. It also includes KDE 20.04 Apps.

The GNOME version is based on GNOME 3.36; it includes a number of visual refreshes as well and users may notice these especially during login and unlock operations. The new Extensions application makes it easier to manage GNOME Shell Extensions as it supports the removal, disabling, updating and configuring of Shell extensions.

There is also a new Do Not Disturb button to block notifications from appearing on the desktop, and a new default dynamic wallpaper that changes its colors throughout the day. Other improvements include an improved Layout Switcher and pre-installed packages updates.

The package manager received new features including support for Snap and Flatpak by default. Manjaro users can now install snaps or flatpaks using Pamac in the user interface and in Terminal.

Now You: Have you tried Manjaro?

Martin Brinkmann is a journalist from Germany who founded Ghacks Technology News Back in 2005. He is passionate about all things tech and knows the Internet and computers like the back of his hand. You can follow Martin on Facebook or Twitter
View all posts by Martin Brinkmann →
Previous Post: « Ubuntu 20.04 LTS is out
Next Post: Fedora 32 Linux Distribution is now available »