The developers of LockHunter, a handy tool to unlock locked files on Windows PCs, have released version 3.3.4 of the application. The new version is the first major release since July 2017 (our last review of LockHunter dates back to 2009); it features a new user interface, option to unlock multiple files, drag & drop support, and more.

LockHunter is a useful program for Windows to deal with files or folders that are locked. You may run into locked files or folders occasionally on Windows devices, e.g. when you try to delete, change or move items that are in use by other programs. A simple example: open a Word document in Word or another editor and try to delete the file while it is open in Word. Windows displays a prompt that informs you that the file cannot be deleted at this point.

Tip: check out reviews of other file unlock tools such as Unlocker, DeadLock, ThisIsMyFile, or File Governor. 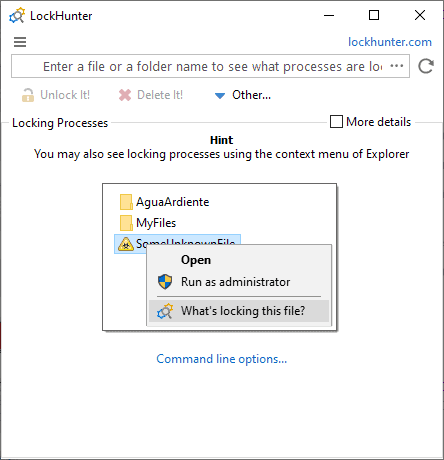 LockHunter 3.3.4 is compatible with all versions of Windows starting with Windows XP. The application needs to be installed on the system before it can be used. Existing installations can be upgraded by installing the new version over the old one.

The program can be used in multiple ways:

One of the main improvements of the new LockHunter version is that it can check multiple files or folders in one operation. The application checks them all and lists all that are locked by processes on the system.

LockHunter 3.3.4 comes with a number of bug fixes and under-the-hood improvements. The developers state that scan performance is improved in the new version and that they have eliminated the annoying "cannot scroll with mouse" button in the process list.

LockHunter is a useful program for Windows. While specialized, it may come in handy if you need help deleting files or folders that cannot be deleted while Windows is running (for whatever reason). The program displays warning prompts when actions are selected and it needs to be noted that it is possible to damage the system if important files or folders are unlocked or removed using the application.

Now You: Do you use a program to unlock files/folders? (via Deskmodder)

Martin Brinkmann is a journalist from Germany who founded Ghacks Technology News Back in 2005. He is passionate about all things tech and knows the Internet and computers like the back of his hand. You can follow Martin on Facebook or Twitter
View all posts by Martin Brinkmann →
Previous Post: « DirPrintOK is a freeware directory printing program from the developer of Q-Dir
Next Post: Textbrowser is a freeware notepad with tabs, syntax highlighting, compare text tool and more »