Firefox 68.0 is a new major version of the Firefox web browser. The release date of the new stable version of Firefox is July 9, 2019.

Firefox ESR, the Extended Support Release, is moved to a new base with this release; this marks a major change for Firefox ESR users as they are upgraded from Firefox 60.x ESR to 68.0 ESR.

Tip: Check out our Firefox ESR 68.0 guide to find out about major changes and differences to Firefox 68.0.

If you missed the Firefox 67.0 release, check it out to find out what changed in that release. 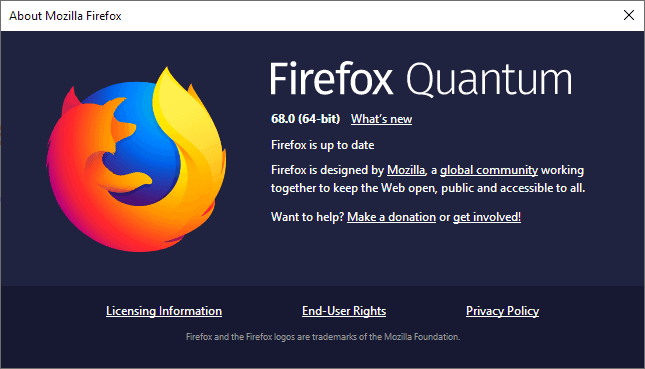 The Firefox 68.0 distribution starts on July 9, 2019. Most Firefox installations are configured to run automatic checks for updates to install new browser versions once they are picked up.

Direct downloads are also provided by Mozilla. Note that the downloads are made available at one point on July 9, 2019 and that they may not be available right after this release guide has been published. 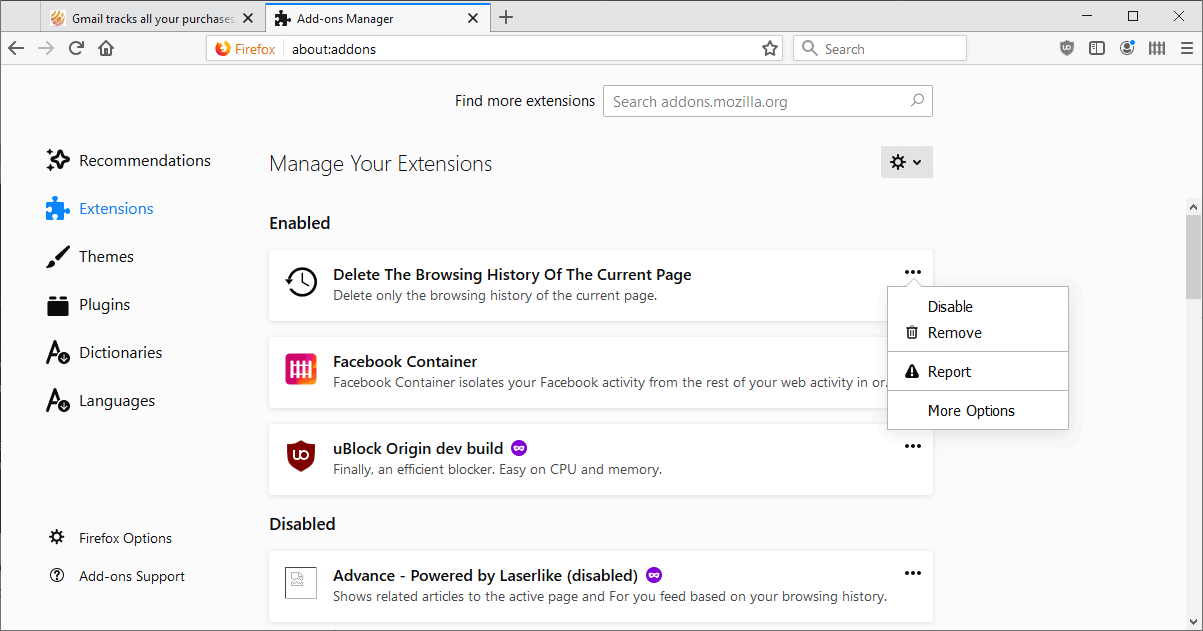 Firefox 68.0 ships with a redesigned add-ons manager. We reviewed the new manager last month and you may want to check out the review for additional details.

A new design is used for about:addons.  Extensions are separated into enabled and disabled groups on the "Manage Your Extensions" page but there are some core differences to the old add-ons manager.

The buttons to enable or disable add-ons have been moved to a menu (the three dots) which means that it takes another click to change the state of an extension or remove it.

The extension profile pages use tabs now, and permissions are listed on one of the tabs. You may also find update information listed there provided that the author of the extension adds the information when a new version is uploaded.

There is also a new report option to report extensions to Mozilla.

Last but not least, you may see extension recommendations on about:addons. These are powered by Mozilla's recently introduced Recommended Extensions program.

Tip: You may disable recommendations if you don't want them: 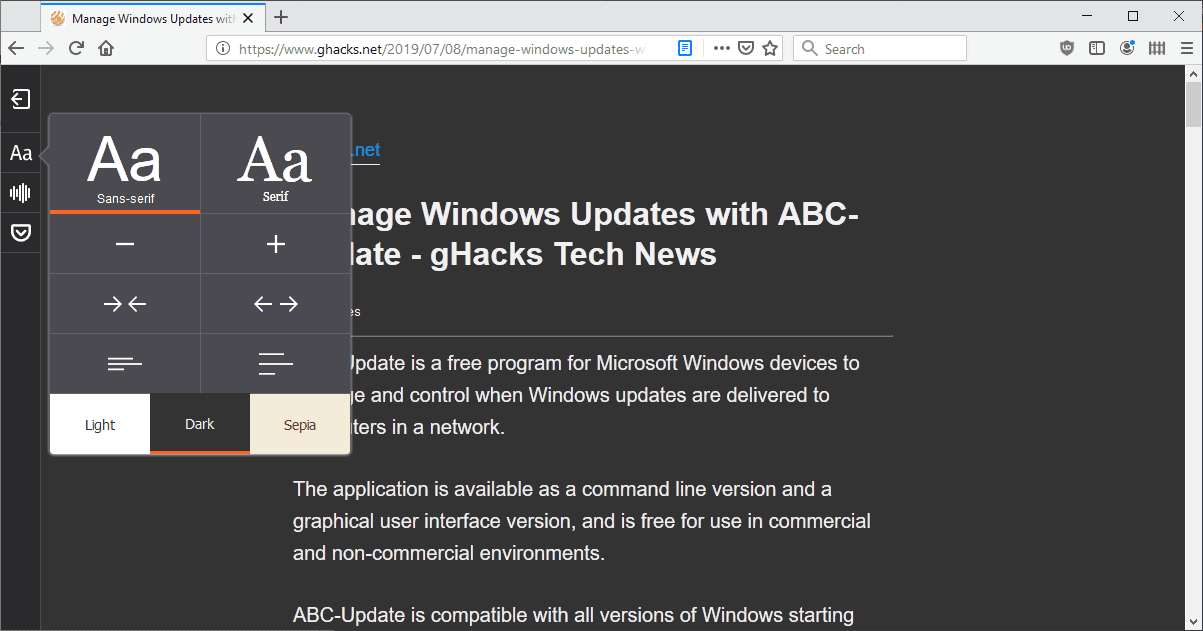 Reader View is a special reading mode of the Firefox web browser that displays articles on a page that is optimized for reading. The mode hides most page elements that are not linked to the article, e.g. menus, sidebar, or advertisement.

You can change fonts and may now also change the default light theme to a dark theme. Just select the font icon in Reader View (you launch Reader View from the address bar of the Firefox browser by clicking on the "page" icon there), and there the Dark option.

Desktop versions of the Firefox web browser may sync a set of default preferences if Firefox Sync is enabled. Firefox users may turn the feature on or off by setting services.sync.prefs.sync.browser.some_preference to True or False on about:config.

Firefox won't sync preferences if the preference is not already available in the Firefox installation that it is pushed to as of Firefox 68.0. Mozilla notes that Firefox users may want to control the preferences that they want synced (if they don't exist by default).

The developers have added a new preference to Firefox, services.sync.prefs.dangerously_allow_arbitrary, that overrides the default behavior so that all preferences are synced. Set the preference to True to sync everything, or False to block preferences from syncing if they don't exist on the target device.

Versions of Firefox prior to 68.0 handled syncing as if the setting was set to True.

Security updates are revealed after the official release of the web browser. You find the information published here later today.

Martin Brinkmann is a journalist from Germany who founded Ghacks Technology News Back in 2005. He is passionate about all things tech and knows the Internet and computers like the back of his hand. You can follow Martin on Facebook or Twitter
View all posts by Martin Brinkmann →
Previous Post: « LanguageTool is a free, open-source, grammar and spell checker for Firefox, Chrome and Windows
Next Post: Group Speed Dial is a free, customizable new tab page extension for Firefox »