Mozilla, maker of Firefox, plans to establish a Recommended Extensions program for the Firefox web browser this summer.

Extensions are a cornerstone of modern browsers such as Firefox. A lot has changed in the past two years in regards to extensions. Mozilla dropped the extensions system that Firefox used and switched to WebExtensions, a move heralded by some and disliked by others.

The effect was that a number of classic extensions were no longer compatible with Firefox; Mozilla removed these extensions from its add-on repository.

Mozilla changed the review process as well. The organization reviewed each add-on prior to publication on Mozilla AMO, the official add-ons store for Firefox, previously but changed the process to a "publish first review later" system. 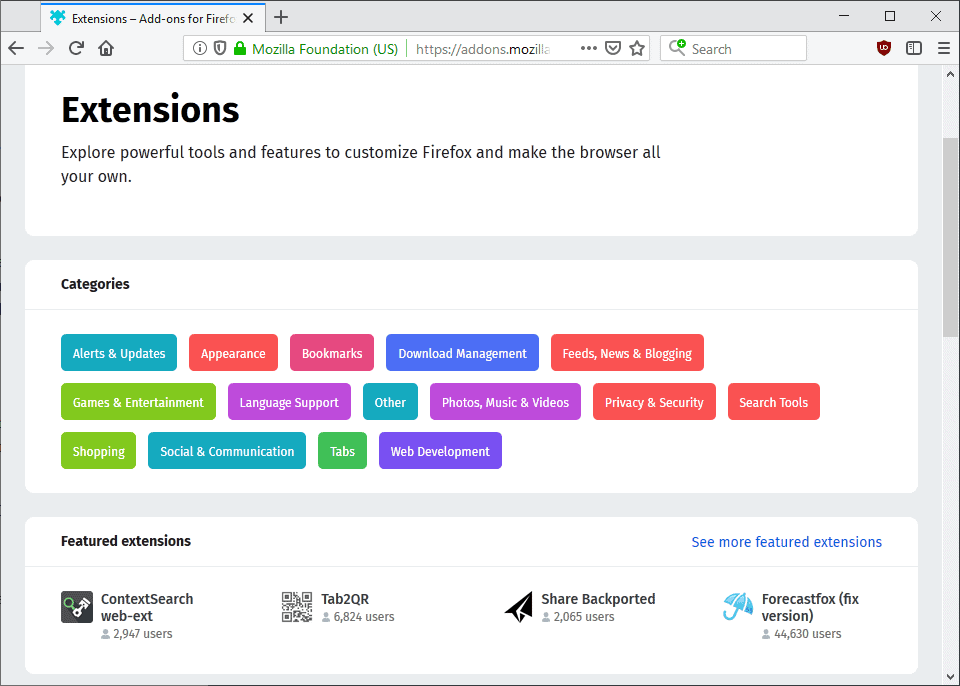 The Recommended Extensions program features a list of curated extensions that meet Mozilla's "highest standards of security, utility, and user experience". A top list of extensions for Firefox that Mozilla plans to promote by increasing their visibility across Mozilla websites and products.

Extensions that are selected for the Recommended Extensions program need to meet certain requirements:

Recommended Extensions are promoted in various ways. These extensions receive a special badge, receive higher weighting in searches and filtering, are used to power the "personalized recommendations" section on Firefox's Get Add-ons page, and may be included in Firefox's contextual extension recommendation feature.

One of the core distinguishing factors between regular extensions and extensions that recommended extensions is that the latter are reviewed each time they are updated and that they undergo a full security review initially.

The security review makes Recommended Extensions the only extensions on Mozilla AMO that receive manual reviews before they are made available (initially and when updated). It is unclear how much of  a delay this will cause for extension updates though.

Another thing that is not clear is whether the new program will affect featured extensions on Mozilla AMO. Several of these will probably be included in the recommended extensions program.

Now You: Which extensions would you like to see in the program?

Martin Brinkmann is a journalist from Germany who founded Ghacks Technology News Back in 2005. He is passionate about all things tech and knows the Internet and computers like the back of his hand. You can follow Martin on Facebook or Twitter
View all posts by Martin Brinkmann →
Previous Post: « How to change the Firefox interface language
Next Post: Mozilla still on track to enable DNS-over-HTTPS by default in Firefox »