Our release information series informs you about major changes in Firefox 65.0. We cover security information, new and removed features, developer changes, changes to the Android version, and known issues.

All Firefox versions get updated around the same time: Firefox Stable is updated from 64.0 to 65.0, Firefox Beta to 66.0, Firefox Nightly to 67.0, and Firefox ESR, the extended support release, to version 60.5.

Tip: Check out our coverage of the Firefox 64.0 release here in case you missed it. 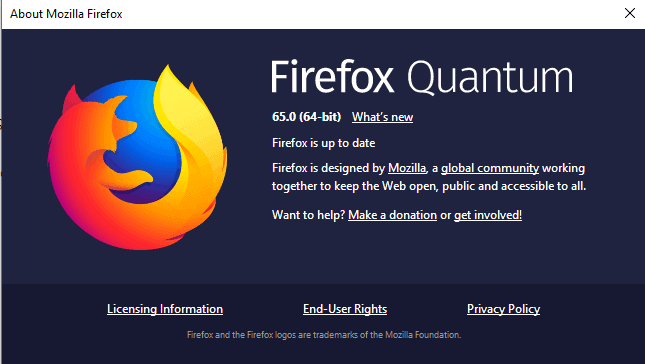 Firefox 65.0 is offered through the browser's automatic update system. Firefox checks for updates regularly by default and will download these automatically if discovered.

You can run a manual check for updates by selecting Menu > Help > Check for updates. Firefox users who prefer to download releases manually can follow the links below to do so. 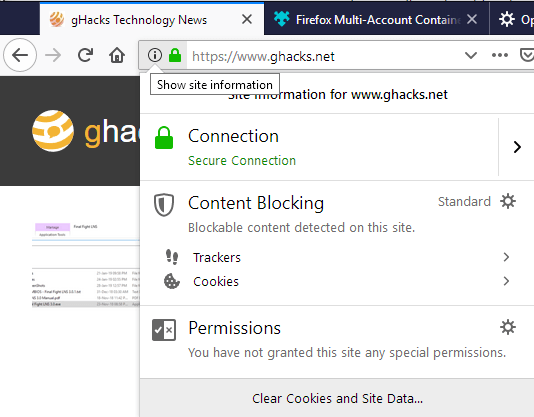 Mozilla improved the built-in tracking protection further. A click on the site information icon -- the i-icon displayed on the left of the web address -- highlights the level of content blocking and elements that Firefox detected on the site.

The content blocking settings in the Firefox preferences have changed as well. You can open these settings manually by loading about:preferences#privacy in the browser's address bar or by following links in the site information panel. 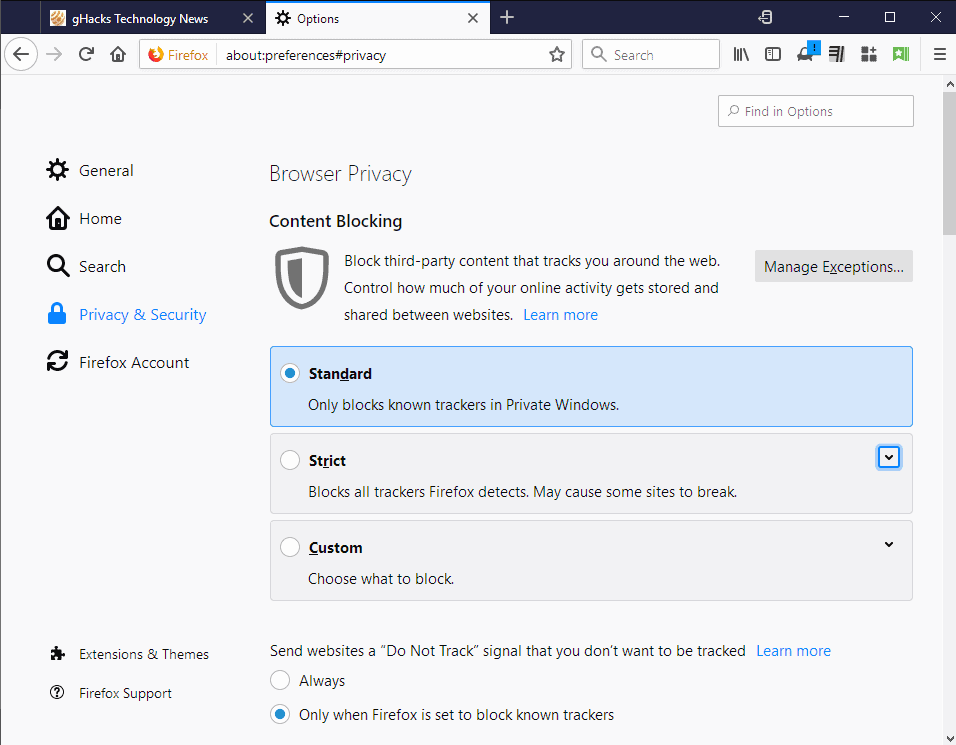 Firefox supports the content settings standard, strict and custom. Standard blocks known trackers only in private windows. You may switch that to strict to block all trackers that Firefox detects.

Mozilla notes that this may break some sites. The third option, custom, gives you more control over the blocking. Use it to define tracker and cookie blocking in detail, e.g. to block cookies from sites not visited or third-party trackers. It is finally easier to switch the interface language. Firefox displays the currently configured language used to display interface elements in the browser. The new menu offers options to set alternatives right from within the Firefox web browser.

Any language added this way may be set as the default interface language. It is no longer necessary to download interface packs or re-install Firefox using a different language version manually.

Visit about:preferences#general in the browser and scroll down to the language section on the page to modify language settings.

Mozilla is working on a new browser for Android. The list of changes in the current mobile browser is relatively short because of that:

Mozilla announces these some time after the release of the new stable version. We will update the guide once the information is published.

The next major Firefox release is scheduled for March 19, 2019. It is quite possible that we will see one or two minor releases that address issues before March 19.