Our release overview provides you with detailed information such as a list of important changes, security information, developer changes, and known issues. 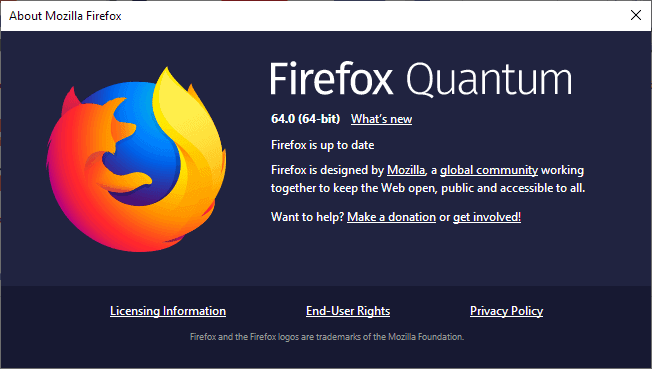 Firefox 64.0 was first offered on December 11, 2018 to all users. The update may not yet be available if you read the guide on December 11.

Firefox is set up to download and install updates automatically. You can run a manual check for updates to pick up the new version that way.

Just select Menu > Help > Check for Updates to run a manual check for updates. The update is downloaded and installed automatically or manually then depending on Firefox's configuration.

Users who prefer manual downloads can do so by following the links below.

Only enabled for users in the U.S., Firefox may display recommendations to users based on activity and other metrics.

Users who visit certain sites, e.g. YouTube or Reddit, may notice a new recommended icon in Firefox's address bar. A click on it displays a suggested extension along with options to install it in Firefox.

Mozilla notes that users may also see suggestions for Firefox features and services based on usage.

Check out our guide on disabling extension recommendations in Firefox here. The feature is powered by this preference: about:config?filter=browser.newtabpage.activity-stream.asrouterExperimentEnabled 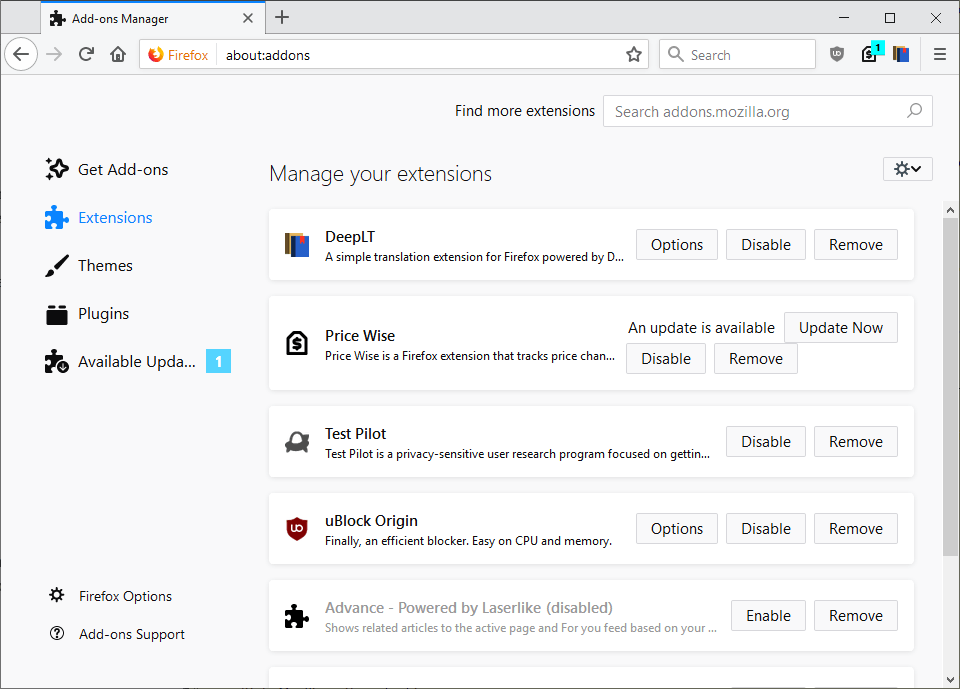 Mozilla implemented several changes in Firefox 64.0 that affect extension management. The layout of the about:addons page was switched to a cards design. Each add-on on the page is listed as a card now in Firefox 64.0.

Cards can be expanded with a click, and the buttons to change the status of the extension, remove it, update it, or open its options are provided.

The new layout is not well suited for small browser windows.

Firefox users may select multiple tabs in the new version of the browser. Just hold down the Ctrl-key and left-click on tabs to select/deselect them.

Drag and drop is supported to move the selection of tabs in the same browser window or to another window.

Selected tabs display a color on top of the tabbar.

Mozilla changed the content displayed on about:performance in Firefox 64.0. The current version displays open tabs and extensions, and the energy impact of each item listed.

Firefox developers plan to add memory information to the page and other options eventually. For now, it is rather bare bones.

All patched security issues in Firefox 64.0 are listed here.

Firefox 65.0 Stable will be released on January 29, 2019 according to schedule. Mozilla may release minor updates for Firefox 64.0 in the coming weeks if issues are found.