The web browsers Google Chrome and Mozilla Firefox will soon support the open video codec AV1. Google and Mozilla released support for the new codec in development versions of the browsers and plan to push the new functionality to the release channels in the near future.

Google launched support for AV1 video decoding in Chrome 69. Chrome 69 is a beta release currently that interested users may download and run to test upcoming functionality. Chrome Beta is not the cutting edge version of Chrome; users who run Canary or Developer channel builds of Chrome have access to the new video encoder as well.

Support for the Av1 video decoded is not enabled by default in Chrome 69 at the time of writing. Google hides experimental features behind flags sometimes; users who want to give them a try need to change the status of the flag to enable or change functionality in the browser.

AV1 promises better compression rates than H.264 but encoding is significantly slower currently. The free codec has to compete with non-open codecs such as H.264 and H.265. 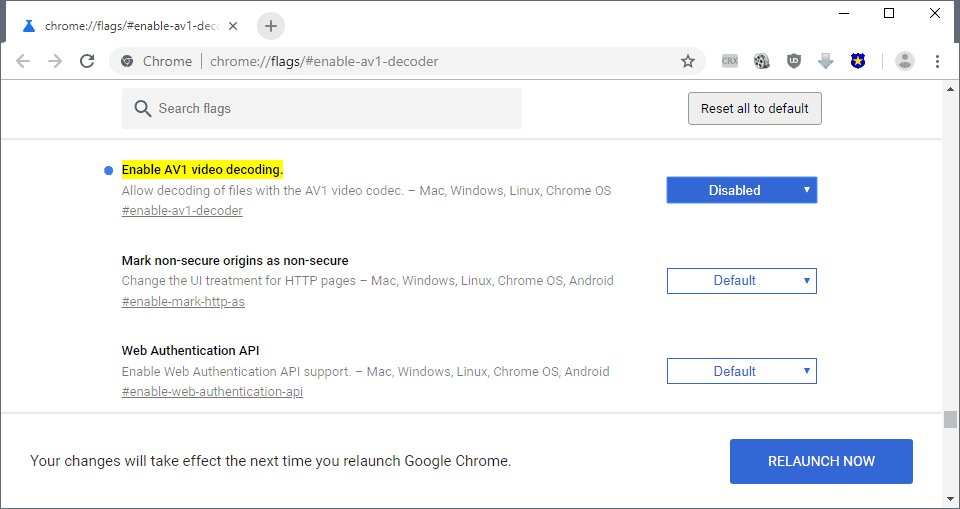 Tip: You can verify the version of Chrome that you run by loading chrome://settings/help in the browser's address bar.

Do the following to enable support for AV1 video decoding in Chrome:

Google plans to launch AV1 support for all desktop versions of Chrome (Windows, Mac OS X, Linux, and Chrome OS) and the implementation is based on the official bitstream specification.

The company notes on its Developers site that support is limited right now as it does not include encoding capabilities at this point in time.

t this time, support is limited to "Main" profile 0 and does not include encoding capabilities. The supported container is ISO-BMFF (MP4).

Mozilla added support for Av1 in Firefox 63. The version of Firefox is currently available as a Nightly release, the cutting edge channel that Mozilla maintains.

Support in Firefox Nightly is disabled by default just as it is in Chrome. Firefox users who run Firefox 63 can enable support for AV1 in the following way:

A value of true means that AV1 support is enabled, a value of false that it is disabled. The feature may land in Firefox 63 or later versions depending on how development progresses. You can keep track of the bug here.

Martin Brinkmann is a journalist from Germany who founded Ghacks Technology News Back in 2005. He is passionate about all things tech and knows the Internet and computers like the back of his hand. You can follow Martin on Facebook or Twitter
View all posts by Martin Brinkmann →
Previous Post: « Firefox 63: Linux out-of-process extensions
Next Post: Is Mozilla's new DNS feature really dangerous? »