Mozilla is working on integrating a Task Manager of sorts into the Firefox web browser. I looked at Mozilla's plans back in October 2018; basically, what Mozilla wanted to do back then was to replace the existing about:performance page with a new page that would highlight open tabs, extensions, and other content, and reveal the memory usage and energy impact of each loaded element to the user.

Users would get options to deal with loaded elements, e.g. close tabs, to deal with content types that use a lot of memory or energy.

Mozilla launched the Task Manager in Firefox 64.0 officially. It listed open tabs and add-ons, and the energy impact of each. While that is useful information, the lack of memory readings made the Task Manager less useful at this point in development.

In Firefox 65, memory readings are added to the Task Manager to make it more useful. Firefox 65 is scheduled to be released on January 29, 2019. 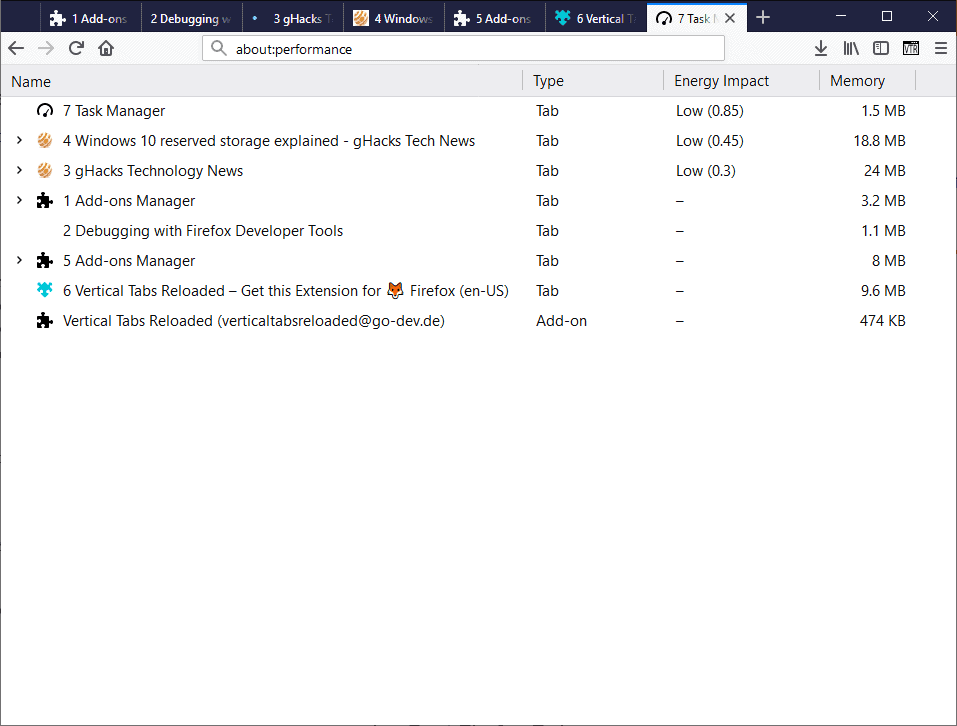 Firefox lists all loaded webpages and add-ons in the interface. The name of each loaded component and its energy impact and memory usage is listed. The readings are updated automatically while the page is open.

The only interactive options in Firefox 65 are to close tabs that are open by clicking on the close x-icon on hover over the row, and to open extensions in the add-ons manager.

Mozilla works on additional features such as column sorting to sort by highest/lowest memory use or energy impact, or by type.

The Task Manager appears to have no keyboard shortcut mapped to it at this point in time. Firefox users may open it either directly by typing about:performance in the browser's address bar, or by selecting Menu > More Tools > Task Manager. The last option is similar to how Google Chrome provides access to the Task Manager.

Chrome users may use the shortcut Shift-Esc to launch the Task Manager of the browser.

How does it compare to Chrome's Task Manager?

Chrome's Task Manager launches in a window and not in a tab. Chrome displays memory, CPU, and network information for each loaded tab and extension, and supports the sorting of the data.

Mozilla's Task Manager displays the energy impact which Google Chrome does not.

Lastly, Chrome users may use Shift-Esc to launch the Task Manager.

What I would like to see in the Firefox Task Manager

The Firefox Task Manager looks as if it could become a useful tool for users of the browser. For that, I'd like to see the following features implemented.

Now You: What is your take on Firefox's Task Manager?

Martin Brinkmann is a journalist from Germany who founded Ghacks Technology News Back in 2005. He is passionate about all things tech and knows the Internet and computers like the back of his hand. You can follow Martin on Facebook or Twitter
View all posts by Martin Brinkmann →
Previous Post: « How to disable Firefox's Adult Filter on the New Tab Page
Next Post: Firefox 66 may move New Tab search input to Address Bar »