Pale Moon 28.0.0 is the first version of version 28.x and as such a major upgrade from the previously used version 27.x which the team released in 2016.

The new release is special for a number of reasons, one being that it is based on the Unified XUL Platform, a forked and modified version of the Mozilla Code Repository.

As far as getting the new version is concerned. You can select Pale Moon > Help > About Pale Moon and click on "Check for Updates" to run a manual check in the browser. The new version should get picked up automatically so that Pale Moon is updated to it automatically. Downloads are also available on the official site for users who prefer it that way. 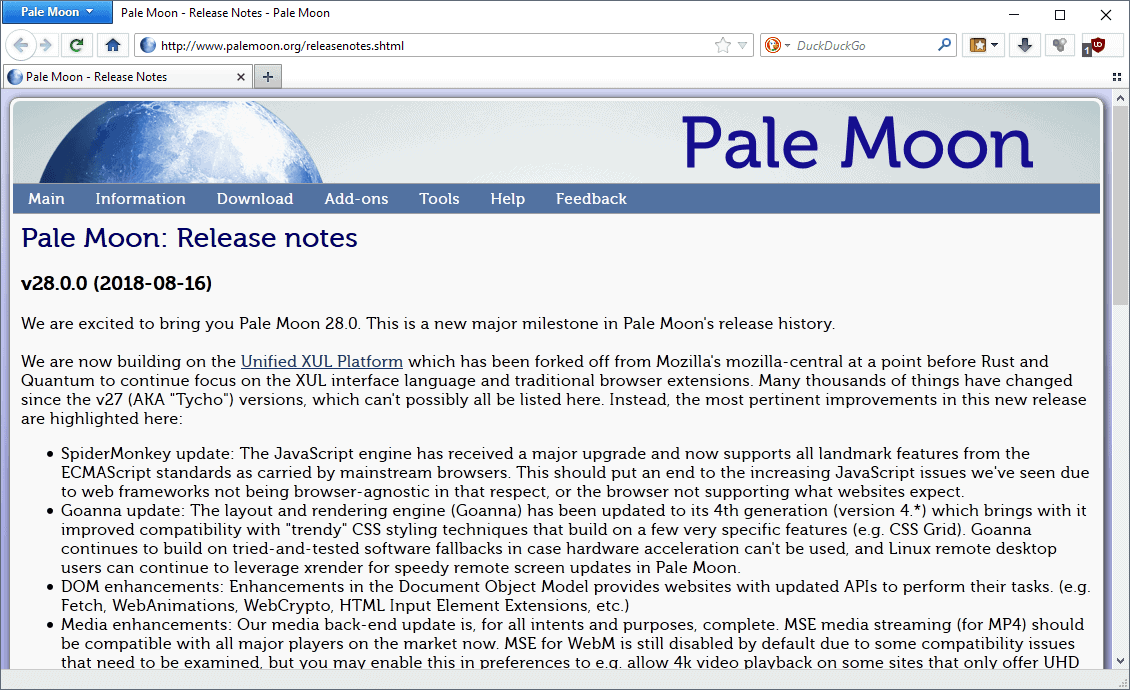 Pale Moon 28.0 offers major under the hood improvements thanks to its new base:

Probably more interesting to existing users of Pale Moon is whether the Pale Moon development team kept its promises in regards to support for features that Mozilla dropped in Firefox.

Pale Moon 28.0 continues to support NPAPI plugins, complete themes and other interface customizations, classic XUL, bootstrapped and Jetpack extensions (legacy add-ons), and does not include DRM in the browser.

Pale Moon 28 supports Windows 7 or newer versions on the Windows platform only officially. The new Pale Moon version should run on Windows Vista as well (but not on Windows XP) but the operating system is not supported officially anymore.

The team's primarily goal was to migrate Pale Moon to the new platform. Pale Moon 28.0 should work just like previous versions for the most part but there will be some changes, for instance to extensions support as some extensions may need modifications to work properly in the new version of the browser.

Pale Moon should work with many of the classic Firefox extensions as well. Some may not work properly on the other hand as the two platforms are not identical.

Pale Moon is not my main browser but a quick test run showed that it worked fine on the sites that I tried it on. It would be great if existing Pale Moon users would share their experience in the comment section below.

Generally speaking, Pale Moon users should experience fewer compatibility issues while using the new version of the browser. There may be regressions, however, but the team hopes to address those in future releases.