Pale Moon 27.0 is the latest version of the popular web browser that introduces several important changes, as well as new and updated features.

We reviewed some of the changes previously here on Ghacks, and suggest you check out the article as we won't cover some of them in detail in this release review.

Pale Moon 27.0 is available for download on the official Pale Moon website already. If you have Pale Moon installed already on your device, you may select Pale Moon > Help > About Pale Moon > Check for Updates, to run a manual check for the update. This should get picked up by the browser's automatic updating module, and downloaded and installed then. 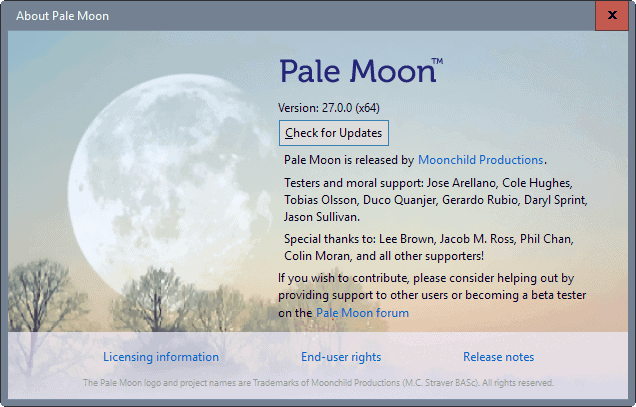 Please note that Pale Moon 27.0 is no longer compatible with Windows XP. If you use the operating system, your only option to keep on using the browser is to stay on version 26 of it.

It is also important to note that Pale Moon 27.0 is only available in English currently. Localized versions will be released when the localization work is done.

One of the major new changes of the new browser version is better media support. Pale Moon 27.0 supports Media Source Extensions (not the DRM part Encrypted Media Extensions) and mp4 media files that are delivered in fragments. 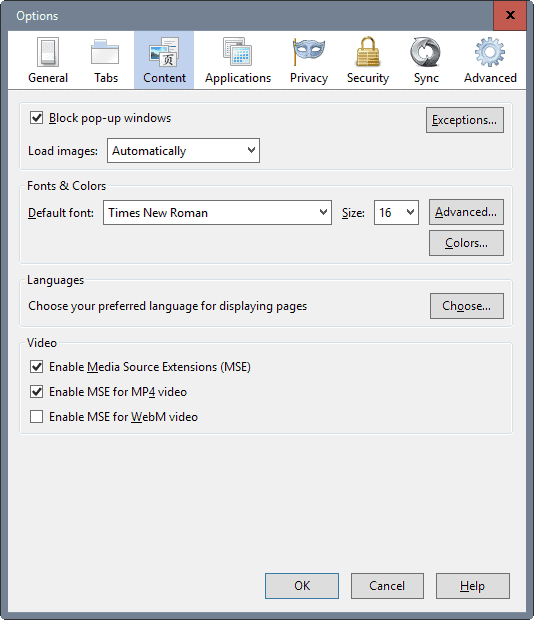 There is also a new option for MSE for WebM videos, but it is not enabled by default as the implementation has a couple of issues right now that need to be resolved first.

Both options should improve the browser's compatibility with many HMTL5 based web streams significantly.

Since EME is not supported, it is still not possible to watch media on commercial streaming services using HTML5. Pale Moon users may however use Adobe Flash for that if they install the plugin on their device.

Other changes and feature additions of interest are support for DirectX 11 and Direct2d 1.1, full support for HTTP/2, and support for SSL / TLS connections to proxy servers.

Many changes and improvements are for "under the hood" systems of the browser. The rendering engine Goanna was updated to version 3.0 and the JavaScript engine was updated as well to support new features.

Both should reduce the number of compatibility issues that users of previous Pale Moon versions experienced in the past on certain sites. 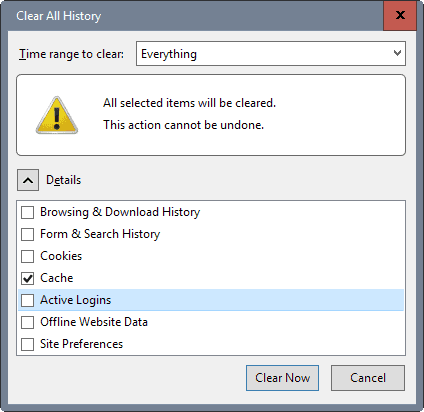 Pale Moon's caching system has improved as well. You may want to clear the cache right after the upgrade to Pale Moon 27.0 to take full advantage of it.

The team has implemented all relevant security fixes for issues in Firefox 50 or earlier versions. This improves Pale Moon security. Several libraries have been updated to their latest version.

A new download option is available that lets you control whether to save zone information when downloading files. 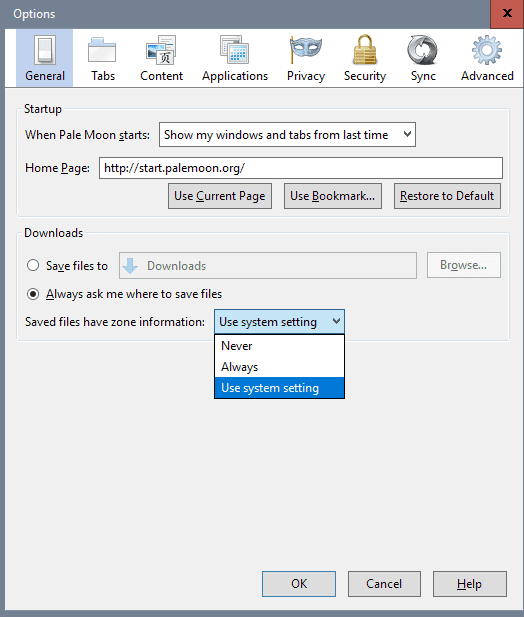 Zone information mark the file as "downloaded from the Internet" when enabled (which it is by default. You can switch the setting in the options to never if you don't want that to happen anymore (Pale Moon > Options > General).

Several features were removed from the latest Pale Moon version:

Pale Moon will continue to support several features that Firefox may not support for much longer or is not supporting anymore at all.

An update to Pale Moon 27, Pale Moon 27.0.1 was released on November 28, 2016. It is a bug fix release that fixes several issues of the new major release of the web browser:

Plus several other issues.

Pale Moon 27.0.2 was released on December 2, 2016. The release fixes on security issue, brings back the Developer Tools (which were not part of the original Pale Moon 27.0 release, and only available as an add-on download), and enables Firefox Compatibility mode by default for the useragent string.

Check out the release notes for Pale Moon 27.0.2 for additional information.

Pale Moon 27.0.3, released December 16, 2016, is a bugfix and security release. The update fixes a variety of bugs that address issues in the program's network and remote font handling, extension compatibility, and fixed the prompt that shows when sites want to save offline data.

The full list of changes of Pale Moon 27.0.3 is available on this page. 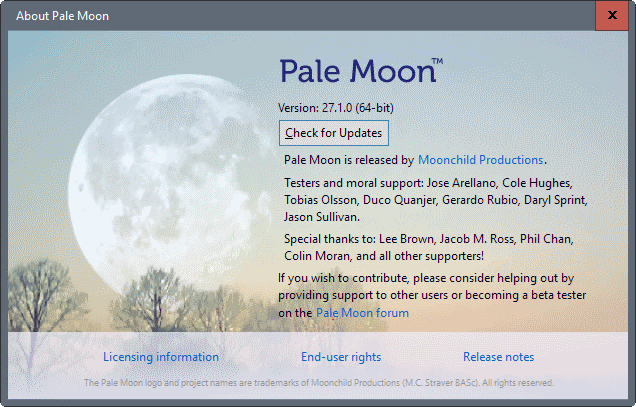 Pale Moon 27.1.0 was released on February 9, 2017. It is a major update that introduces changes, improvements, fixes and security updates.

Apart from that, it is also the first version of Pale Moon that supports PMKit modules. It is an experimental library designed to offer a basic compatibility layer with Mozilla's Add-on SDK.

As far as changes are concerned, there are plenty. You can check them all out on the official release notes page on the Pale Moon website. Below is a short list of important or noteworthy changes:

Pale Moon 27.1.1, released on February 21, 2017 is a stability and bugfix release. The new version fixes stability issues on Windows that could result in hangs, how the Adobe Flash Plugin is detected, a media handling fix to prevent crashes.

Release notes are available on the official Pale Moon website.

Pale Moon 27.1.2 was released on March 3, 2017. It fixes a single issue: This is a small update adding a workaround for potential deadlocks happening in media elements

Pale Moon 27.2.0 was released on March 18, 2017. The new version is a major update in regards to security, compatibility, and back-end functionality.

The release notes list many changes, many of them not visible to users of the browser. This is for instance the case for library updates. Users benefit from those obviously in one way or another.

As far as features and changes are concerned that users may notice:

Pale Moon 27.2.0 ships with lots of security and privacy changes. This includes support for new algorithms, fixes for potential issues, and other proactive security adjustments to improve the browser's security.

Pale Moon 27.2.1 was released on March 24th, 2017. The update brings stability and usability improvements to the browser. It includes several crash fixes, and other improvements. Check out the release notes for a full run down on what is new and changed.

Apart from under-the-hood changes, Pale Moon 27.3 brings along with it performance improvements, a number of fixes and security updates.

The browser ships with a number of new preferences:

All changes are listed on the Pale Moon release notes page.

Pale Moon 27.4 has been released. You can check out our review of the latest version here.

Now You: What's your take on the changes in Pale Moon 27?

Martin Brinkmann is a journalist from Germany who founded Ghacks Technology News Back in 2005. He is passionate about all things tech and knows the Internet and computers like the back of his hand. You can follow Martin on Facebook or Twitter
View all posts by Martin Brinkmann →
Previous Post: « Vivaldi 1.5: Delta updates, Philips Hue support
Next Post: 4K Netflix in Browser? Only with Microsoft Edge »