Dont install or upgrade to CCleaner 5.45

Piriform/Avast released CCleaner 5.45 recently to the public that Windows users may not want to install or upgrade to.

The changelog of the new release highlights the change in euphemistic terms: "Added more detailed reporting for bug fixes and product improvements". The company added privacy options to CCleaner in May and stated back then that it collected only anonymous data from free users and did not display the options to free users because of that.

CCleaner users who run the new release may notice two changes immediately: It is nearly impossible to disable the monitoring part of CCleaner (Active Monitoring), and there are not any privacy settings anymore in the free version of the program. 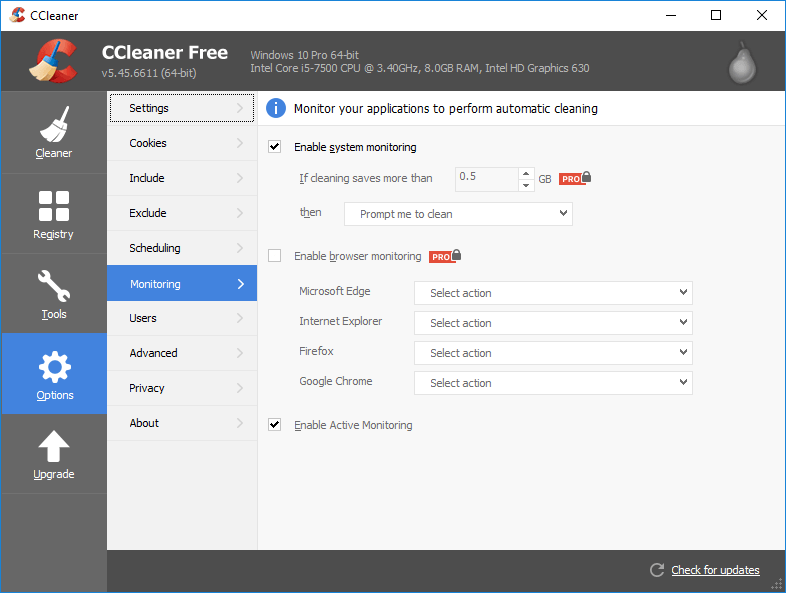 While you may go to Options > Monitoring to disable "Enable system monitoring" and "Enable Active Monitoring" there, you will notice that the monitoring turns itself on again on the next start.

Note that you can't close CCleaner anymore using interface controls; A click on the x-icon minimizes the program, and the right-click system tray icon displays no option to terminate the program. The only option that is available is to terminate CCleaner forcefully.

The only workaround requires three steps:

Active Monitoring defaults to on and since it is impossible to close CCleaner using interface controls, it reports back to Piriform/Avast regularly.

Piriform addressed user concerns in a post on the official forum. A Piriform admin confirmed in the post that the company extended the analytics functionality of the software "in order to gain greater insight into how our users interact with the software".

Piriform states that the data is completely anonymous, and that it uses the data to "rapidly detect bugs, identify pain points in the UI design, and also understand which areas of functionality [the company] should focus [...] time on".

The company reiterated in the post that it does not collect personally identifiable information about free users but failed to disclose what data it collects and how it stores, shares, and processes the data.

The extended analytics functionality was added to the Active Monitoring in CCleaner 5.45; Piriform's representative admitted that the solution was not the best.

The company promises to do better by separating Active Monitoring and the anonymous collecting of usage analytics in the user interface so that users can (better) control the two features. Users will have options to enable none, some or all of the functions directly from the user interface.

The new release is weeks away according to the post and users who upgrade to version 5.45 are stuck with a program that runs constantly in the background and reports analytics data back to Piriform. Most users may not be tech savvy enough to disable the monitoring component (and thus the sending of analytics data).

Update: Piriform contacted Ghacks about the controversy surrounding the last version of CCleaner. The company plans to release a fact sheet that outlines which data it collects, its purpose, and how it is processed.

CCleaner was a program that worked fine out of the box for years but that is not really the case anymore. While the cleaning works as good as it did years ago, recent decisions to push the monitoring functionality, introduce advertising popups for pro upgrades, hack, and analytics/privacy controversy have painted the program and the company in a bad light.

The battle to win back user trust is an uphill one. If you ask me, Piriform needs to implement clear and functional opt-out options (better opt-in but that won't be happening) and reveal exactly what data it collects and how that data is stored, shared and processed.

Now You: What is your take on the recent version? (via Techdows)

Martin Brinkmann is a journalist from Germany who founded Ghacks Technology News Back in 2005. He is passionate about all things tech and knows the Internet and computers like the back of his hand. You can follow Martin on Facebook or Twitter
View all posts by Martin Brinkmann →
Previous Post: « RainWallpaper gives Windows dynamic wallpaper capabilities
Next Post: Windows Firewall Control is now free »