Handbrake is a popular open source cross-platform video converter that you may use to convert video files and DVD and Blu-Ray media without encryption from one format to another.

We reviewed Handbrake in 2007 for the first time here on Ghacks, and followed development of the video converter since that time. The developers released the major milestone Handbrake 1.0 in 2016, and today another major update.

One of Handbrake's major features is support for conversion presets which are designed to convert videos for optimal use on specific devices, programs or video hosting sites.

The application supports all major video formats but limits output to mp4 and mkv. 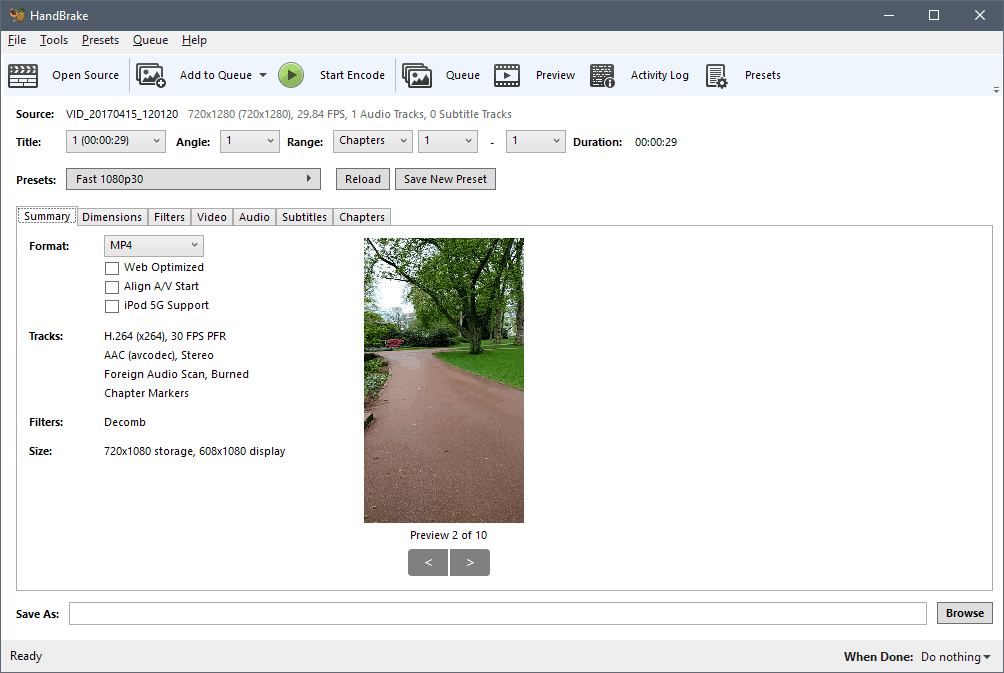 Handbrake 1.1.0 is a major update that introduces new features and modifies existing ones. Users of the program may notice several user interface improvements. Presets have been integrated into the main conversion workflow and the main window has been redesigned to improve usability and consistency.

Handbrake 1.10 comes with a new summary tab that displays important information right away.

The core conversion process has not changed all that much though; you load a video file that you want to convert and select a preset that you want to work with or modify transcoding parameters manually if you prefer that or need to do so if no preset is available.

You can save custom configurations as new presets so that you may select custom presets at any time in the future.

Handbrake 1.1.0 supports new presets; Internet users who host videos on Vimeo or YouTube find presets for these platforms in the new version. Apple TV, Chromecast, Fire TV, and Roku owners find new presets for 2160p and 4K resolutions for the mentioned devices, and there are new 2160p and 4k Matroska presets as well. Last but not least, new post-production presets are available as well.

Presets speed up the transcoding process significantly. All it takes is four steps to convert a video from start to finish:

You can encode individual files one after the other, or use Handbrake's queue functionality instead to batch transcode video files.

Handbrake 1.1.0 includes plenty of other changes. Here is a short selection of important changes or improvements:

Handbrake 1.1.0 is a major update for the video converting software. The new version introduces new features, updates presets and third-party libraries, and comes with other improvements across the board.

Now You: Do you use video converters? (via Deskmodder)