A recent security audit of the email client Thunderbird and the encryption extension Enigmail revealed unpatched security issues in the email program and in Enigmail.

The report has not been released yet as issues are not yet patched in the Thunderbird program. The researchers found 22 vulnerabilities in total in both programs; three of the vulnerabilities received a critical rating, five a rating of high.

Some results of the audit were posted on the Posteo blog. All issues that the researchers found in Enigmail have been fixed already in Enigmail 1.9.9 which users can download from the official project website. 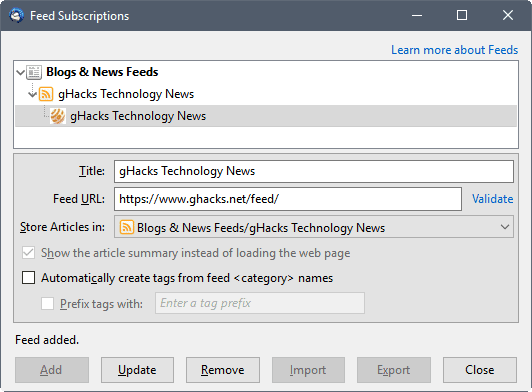 The report has not been published in its entirety yet, but Posteo has some insights for Thunderbird users to reduce the risk of running into exploits.

The following recommendations have been posted:

If you use Thunderbird to read RSS feeds, then you may want to consider disabling the functionality for the time being until a patch is released. Posteo notes however that it may take until Thunderbird 59 which won't be out for months.

Here is how you turn off the functionality for now:

The second option may be less secure. I cannot say for sure as the vulnerability has not been revealed yet. If you want to make sure, delete the feed account in Thunderbird. You can make a backup first to restore the account after the update has been released.

Martin Brinkmann is a journalist from Germany who founded Ghacks Technology News Back in 2005. He is passionate about all things tech and knows the Internet and computers like the back of his hand. You can follow Martin on Facebook or Twitter
View all posts by Martin Brinkmann →
Previous Post: « Thunderbird Photon Design refresh and WebExtensions
Next Post: Thunderbird 52.6.0 with security fixes released »