Mozilla, maker of the Firefox web browser, announced today that Firefox support for Windows XP and Windows Vista will be ended in June 2018.

Mozilla moved Windows XP and Windows Vista users of Firefox to the web browser's ESR channel during the release of Firefox 53. This meant basically that Firefox 52.x was the last stable channel version of Firefox for those operating systems, and that XP and Vista users could not run Firefox 53 on their devices.

Firefox ESR is the Extended Support Release of Firefox. It is designed primarily for organizations who want more time when it comes to browser updates. Instead of having to cope with new releases every six or so weeks, Firefox ESR gets major updates only after eight release cycles. The browser gets security updates however when new Firefox versions get released.

Mozilla promised to support Windows XP and Vista until at least September 2017. The organization planned to analyze the situation then to come up with a final date for ending support for the two operating systems.

Windows XP and Vista users who use Firefox ESR currently may use that particular version of Firefox until June 26th, 2018. Firefox ESR is then updated to version 59.x, and that version does not support Windows XP or Windows Vista anymore. 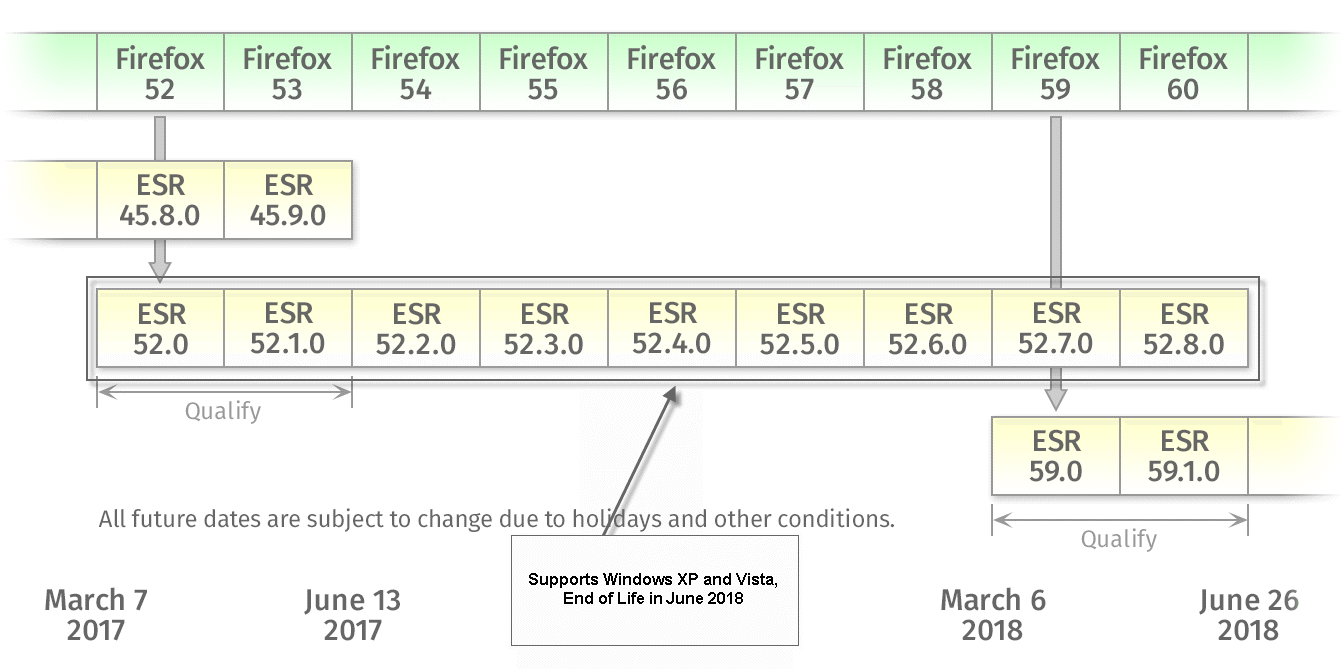 Mozilla supported XP and Vista longer than other browser makers and Microsoft. Google dropped support for both operating systems back in 2016 for instance, and so did Opera Software and Vivaldi Technologies. Microsoft does not support Internet Explorer on XP or Vista anymore as well.

Pale Moon supports Vista but not XP, SeaMonkey does support XP and Vista.

Netmarketshare sees Windows XP usage at 5.69% of the overall desktop operating system market, Vista at 0.43%; the combined usage share sits around 6% therefore according to the company.

Now You: Still running XP or Vista? What do you plan to do once support runs out?

Martin Brinkmann is a journalist from Germany who founded Ghacks Technology News Back in 2005. He is passionate about all things tech and knows the Internet and computers like the back of his hand. You can follow Martin on Facebook or Twitter
View all posts by Martin Brinkmann →
Previous Post: « Firefox 56: new preferences and Ghacks user.js changes
Next Post: Nuke Anything Enhanced for Firefox 57 »