by Martin Brinkmann on November 11, 2015 in Google Chrome - 8 comments

Google announced yesterday on the official Google Chrome blog that it will end support for various operating system in April 2016.

While it comes to no surprise that Windows XP is mentioned by the company, the fact that it will end support for Windows Vista at the same time is.

The main reason why that is surprising is that Windows Vista is still supported by Microsoft. Microsoft ended support for Windows XP on April 8th, 2014 and while Google could have made the decision back then to end support for the popular operating system, it decided against it due to its popularity.

In fact, when you check the operating system usage share you may notice that Windows XP is trailing only Windows 7 in usage share. May, because there are not definitive stats which is why statistics differ depending on the service that you are using. 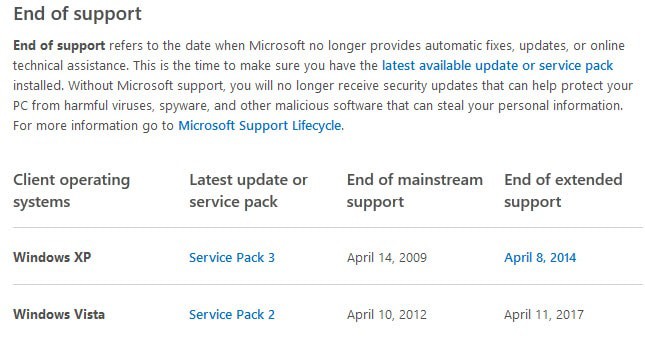 Windows XP use is in decline though, as the operating system's usage share fell significantly in 2015. If you look at the month by month change you will notice that it dropped about 0.80% each month on average in the year.

If the trend continues, it will lose another 5% until April 2016 which would put its usage share in the 7% range at that time.

This does not necessarily mean that 7% of all Chrome users run Windows XP machines, as the figure can be higher or lower. Since Google has those numbers, it is likely that the projection is lower than that.

As far as Vista is concerned, it has a usage share of less than 2% currently. The operating system lost about 0.1% each month on average this year.

The decision may still come as a surprise considering that Microsoft supports Windows Vista until April 2017. Again, it depends largely on how many Chrome users are still running Windows Vista and not on the operating system's general usage share.

Still, those Windows Vista users who are using Chrome are affected by the decision.

As far as the Mac platform is concerned, all versions of Mac OS X 10.8 and earlier won't be supported from April 2016 onward.

According to Google, Chrome continues to function on those platforms but it will not receive updates or security fixes anymore.

It is too early to say how this will affect browsers that depend on Chromium but there is a likelihood that some may continue to support XP or Vista after April 2016.

Now You: are you affected by the end of support announcement?