Next uTorrent version to be browser based - gHacks Tech News
ghacks.net

Next uTorrent version to be browser based

In the latest episode of Torrentfreak's Steal This Show podcast, BitTorrent creator Bram Cohen reveals that the next uTorrent version will run in a web browser.

When it comes to popular BitTorrent clients, uTorrent is probably the most popular of them all. With about 150 million active users per month, it easily beats other popular Bittorrent solutions by a large margin.

While that is the case, development has stalled more or less in the past five or so years. Updates were released regularly for the application, but new features that would get users excited about were not really released.

One of the main reasons for that was the focus on other endeavors by uTorrent's parent company BitTorrent Inc.

While uTorrent attributes to a large percentage of the company's revenue, focus was laid on expanding the business in other directions using the popular technology as the backbone. The company launched BitTorrent Sync -- which was renamed to Resilio Sync later on and moved to its own business -- and BitTorrent Live, a P2P real-time streaming technology for instance.

uTorrent meanwhile continued to be successful, but criticism of the program and its parent company rose. Ads were introduced in the program, and it all culminated in the bundling of a Bitcoin miner with the application. The company promised later on to move away from the bundled software monetization model.

Things have calmed down at BitTorrent Inc, according to the interview. About 50 people work for the company which wants to focus on proven products in the future.

uTorrent in the web browser 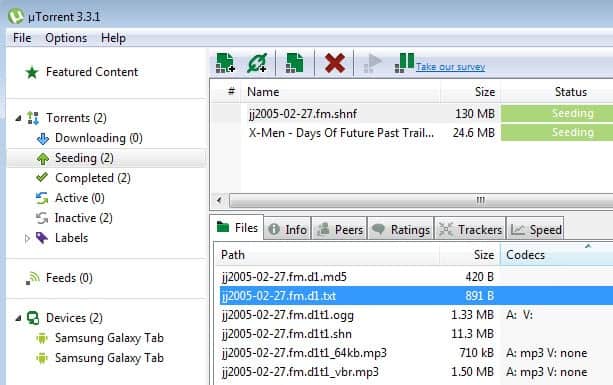 The company makes most of its money from advertisement in uTorrent. This is not going away, according to the interview. What must come as a surprise to many users of the program however is that the future version of uTorrent will run in a browser.

Moving a desktop program to the browser is a major undertaking and cut, one that will certainly be disliked by part of the program's userbase.

According to Cohen, the web based uTorrent will offer a "nicer experience", "modern widgets", and a "greatly improved streaming experience" as users may stream torrents directly from the browser.

What is going to happen to the desktop client? Cohen does not say; maybe some form of integration is planned, a side by side option at least for the foreseeable future, or, and that is also a possibility, it is abandoned once users start to move to the web based version.

A web-based version offers advantages and disadvantages over desktop programs. On the pro side, there is nothing to run or install anymore, as it runs in a browser. It may also be run from any location, but it is unclear right now how the actual handling of the torrent files is going to happen.

On the negative side, users will likely have to register accounts to use the web version. Some data will be stored in the cloud, which, depending on what uTorrent is being used for, may not be in the interest of part of the userbase.

As far as the future is concerned, BitTorrent Inc could introduce subscriptions, cloud-based storage options, VPN support, use of its own servers for file transfers, and more.

A web-based version will certainly be more lucrative than the standalone client. The main question is how many of uTorrent's current users are willed to move to the web-based version of the client, and how the migration will take place.

Now You: What's your take on the decision?

Article Name
Next uTorrent version to be browser based
Description
In the latest episode of Torrentfreak's Steal This Show podcast, BitTorrent creator Bram Cohen reveals that the next uTorrent version will run in a web browser.
Author
Martin Brinkmann
Publisher
Ghacks Technology News
Logo