From this month forward, Microsoft will no longer release free Advanced Security Notifications before patches are made available on Patch Tuesday, the second Tuesday of the month.

The company's Advanced Notification Service informed customers about security updates in advanced so that customers could get a better understanding of affected products.

Microsoft announced yesterday that it made the decision to discontinue the free publication of the information. Instead, the company decided to only make the information available to Premier customers and organizations involved in the company's security programs.

Advanced notifications won't be made available on the Microsoft Security Response Center blog anymore and not be published publicly before the release of the actual security bulletin.

The reason for the change, according to MSRC Senior Director Chris Betz, is that many customers don't use or require the information anymore due to "optimized testing and deployment methodologies".

According to him, most customers wait for Update Tuesday before they take action or don't take any action at all and just let the updates be installed automatically.

Customers are "turning to Microsoft Update", tools like "Windows Server Update Service" or cloud-based systems which are updated automatically.

End-users who are not Premier customers or organizations involved with select Microsoft security programs won't be able to access security information in advanced anymore.

While Microsoft suggests to use the recently introduced myBulletins service, it is not offering those information at all. 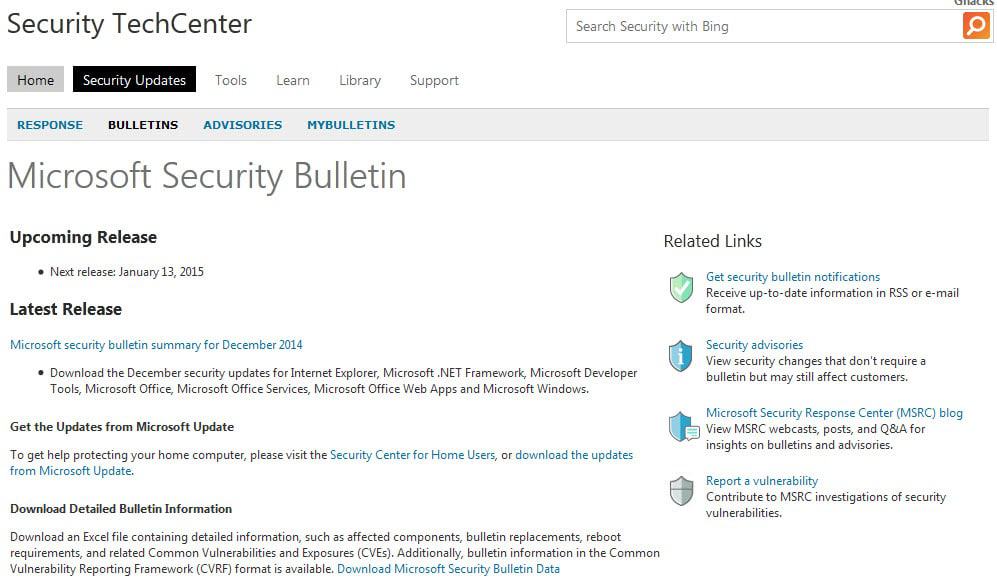 Instead, it is providing Microsoft customers with options to look up information about published security bulletins and advisories only.

Microsoft has not released Advanced Notifications for security bulletins that it plans to release in January 2015.

The end of free Advanced Security Notifications is not the only update-related change that Microsoft introduced in recent time.

The company discontinued the deployment priority matrix for instance and replaced it with the new Exploitability Index which sorts bulletins from top to bottom instead of groups.

Now You: Did you use the Advanced Notification Service?