Zenmate was rated one of the best Chrome VPN recently by us. While it is used by many to access geo-restricted contents, it is adding other VPN-specific features to it as well that include encrypting traffic and hiding the computer's IP address.

The company behind the extension has released an Android application called ZenMate Security & Privacy VPN which brings a similar feature set to Android devices.

It needs to be noted that it is only compatible with Android 4.0 and up, and that you need to either sign in to an existing account or create a new one by signing up with an email address of yours.

There are some differences between the app and the popular browser extension. First of all, the Android app brings a full VPN to the device which means that all applications and services running on it benefit from it. As you may know, the Chrome extension, which works in Opera as well by the way, is limited to the browser.

The Android app in addition to that is available as a free and premium version. The free version is limited to 500 Megabyte of traffic per month while premium traffic is not limited.

In addition to that, premium users can use compression and harmful sites blocking features that the free version does not offer. 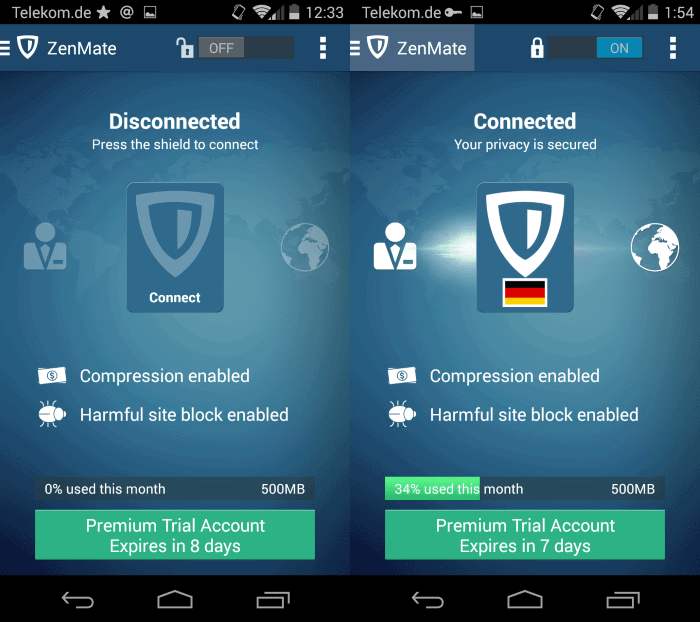 New users are automatically signed up for a seven day free trial of the premium version that includes the two features. It is however possible to disable those if they are not required.

The application is easy to use. Once you have started it you can flip a switch to connect or disconnect directly. Once you are connected to the VPN all traffic of the device is using it regardless of application or service. The app displays a selection of locations, Germany and US for instance, that you can select one from to connect to.

On first connect, you may also need to authorize it to act as a VPN before you can do so.

While that is great most of the time, it is important to note that some services may block access based on that or at least add a record to the connection history if they notice a connection from a different location than last time.

500 Megabyte may be more than sufficient depending on what the device is used for. While it won't be sufficient for video or audio streaming, it should last sufficiently long for basic web surfing, email, messaging apps and the occasional social networking app check.

Zenmate for Android is an easy to use VPN application that comes as a limited free version and an unlimited premium version. Heavy users, those who stream media a lot, download lots of apps or use the Internet heavily in other ways, may want to consider subscribing to the premium version as the 500 MB traffic limit of the free version won't last long, certainly not a month.