Slimming down and compacting seems to be the main trend on the Internet these days. If you look at web browsers, you notice that they try to get rid of as many user interface elements as possible. The culmination here was the release of Opera Coast which shipped with no visible UI at all.

If you have visited YouTube in the last 24 hours you may have noticed a change on the popular video hosting site that you may or may not like.

The video player has been revamped slightly, by compacting the options that are displayed to you when you play videos.

A single button is now displayed on the player's toolbar instead of individual buttons for changing the player's size, the video's quality or toggling annotations on or off. 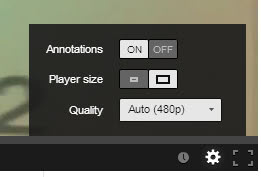 A click on the button displays all three options in a menu that opens up. Annotations and player size can be changed with a single click here on the option that is currently not selected. The video quality menu comes with its usual pulldown menu displaying all levels of quality the video is available in.

Note: the annotations and player size buttons are toggle buttons. You can click anywhere on them to toggle the value.

If you are using at least one of the features regularly, you will notice that you will click at least twice as much as before to do so.

The player toolbar itself displays the following options now directly:

You are probably wondering why these three options have been combined, and why others, like the watch later button, are still displayed on the toolbar directly.

I do not have an answer for that. Google states the new player  offers improved captions control and a cleaner look. It is likely that the company has looked at usage stats and based its decision on that, but I'm not really convinced that the watch later or fullscreen functionality is used more often than the quality menu or the player size.

What's your take on the change?

The player interface may look simpler or cleaner now as Google puts it, but it hides features that at least some YouTube users have been making use of behind a new menu making things more complex than before.

Previous Post: « YouTube authors and marketers: get detailed video stats with vidlQ Vision for Chrome
Next Post: How to clear, change or move the Spotify cache »