Update: The application is no longer available. Google released its own wallpaper application for Android in the meantime which you may use instead. It is called Wallpapers and available on Google Play. End

GoogleNowWallpaper HD is a free app for Android devices that will add a Google Now wallpaper to the device and change the background image automatically based on the time of day.

When you first start the application you are presented with a selection of wallpapers for eleven cities that you can select one from. Most are US-based, for example New York, Seattle, Chicago and Houston, but you do find Berlin and London thrown into the mix as well.

All you really have to do is tap on a city that you want to use and its wallpaper will be automatically activated. When you switch back to your phone's start screen now or any other screen displaying widgets and app links, you will notice that the wallpaper that you have just selected appears here.

This may not be that spectacular yet, especially if the city you are living in is not listed by the app yet. What may make it interesting however is the fact that it will automatically change based on the time of the day. Each wallpaper ships in four different versions that depict the time of the day.

The night version of the wallpaper uses darker colors than the day wallpaper, while dawn and dusk sit in between the two.

All wallpapers have a maximum size of 1440x1280 which should be sufficient for most phones but may look blurry on phones using higher resolutions.

You can make a couple of configuration changes in the settings. Here you can disable the change of wallpapers if you do not require that functionality and set the time of the day interval as well. Night for instance lasts from 21:00 to 4:00 but you can modify that so that it begins earlier or later for example.

The wallpaper app may be worth a try if you like the art style of Google Now or live in one of the cities or places listed in the application. 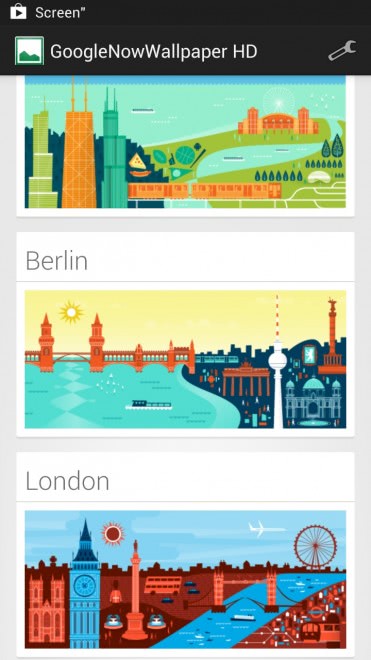 Previous Post: « Android: improve battery life and free up RAM by disabling services
Next Post: « Wakelook Detector for Android tells you which apps drain the most battery using the feature